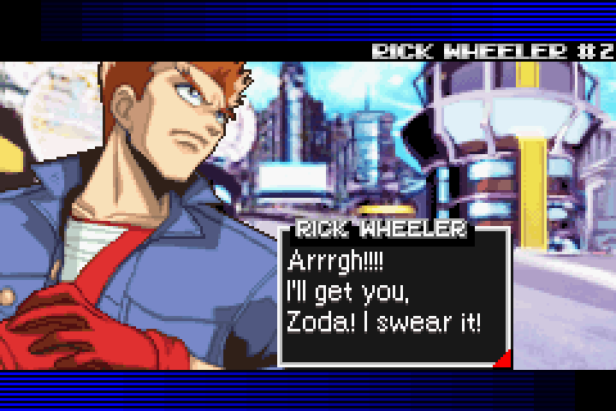 It’s easy to forget that there was an F-Zero anime series – after all, it was cancelled after just 15 episodes of the English dub had been aired. But not only did it happen, it also managed to receive two spin-off games on the Game Boy Advance, the first of which was released in the West as F-Zero GP Legend. Much like its predecessor F-Zero: Maximum Velocity, GP Legend aped the Mode 7 stylings of the original SNES game, but included a greater variety of vehicles to race with.

Beyond the expected addition of new courses and vehicles, the fact that F-Zero GP Legend wan an anime tie-in meant that the game included a brand new story mode. While this wasn’t the first time an F-Zero game had included a story mode (that distinction goes to the Gamecube’s F-Zero GX), this one had more stages and allowed players to race as a greater variety of characters. The main story centres on Rick Wheeler and his battles with Zoda, but quickly spirals out to encompass Captain Falcon, Black Shadow and a variety of other favourite characters.

As is expected of F-Zero, the racing action is of a high quality. However, it’s difficult to shake the feeling that you’ve played the game before, as the basic game design was well over a decade old by the time it came out – a feeling that is only exacerbated by the inclusion of various SNES tracks as the Platinum Cup. Still, if you can’t get enough F-Zero this is absolute gold.