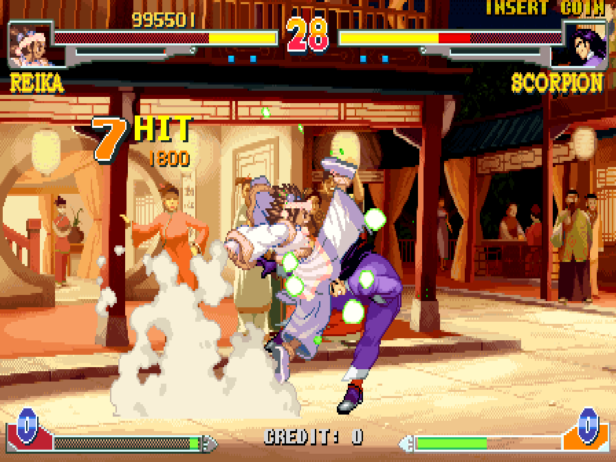 Martial Masters shouldn’t be an obscure game. We should be talking about it alongside Guilty Gear as a classic that rose up to challenge Capcom and SNK’s dominance of the 2D fighting scene. Of course, we’re not. That’s because Martial Masters was a victim of poor timing. IGS released its PolyGame Master arcade board in 1997, targeting the low end of the market occupied by the likes of the Neo Geo – an approach that would give a home to a variety of classic 2D games, but at a time when the arcade market was thrilled with 3D games.

The action in Martial Masters is standard one-on-one fighting fare, but the game boasts a number of distinguishing features. Chief amongst them is the variety of fighting styles employed by the diverse cast of characters, some of which like capoeira are uncommon in 2D games, while others like Scorpion’s bizarre style appear to be unique to Martal Masters. Each character boasts the standard issue variety of special and super moves, as well as shadow moves which briefly summon a clone of your fighter. These consume some of your super bar, but are great for extending combos or low risk counter-attacks. Martial Masters is a treat for fans of 2D visuals, with beautiful sprite work giving an appearance that is equal to anything from Capcom and SNK during their heyday. The sound is a bit weaker, with the compositions never reaching the level of quality achieved by the graphics or gameplay, but this is a relatively minor problem.

The overall package is one which could have taken the market by storm had it arrived in the mid-Nineties, and it’s telling that our colleagues on other magazines guessed that it did. Sadly, by 2001 even huge crossover titles like Capcom vs SNK 2 were struggling for the attention of the gaming public, a factor which doubtless helped to keep Martial Masters confined to the arcade. IGS games almost never receive conversions as the company doesn’t develop console games itself, and with the low popularity of 2D fighters at the time it’s unsurprising that console developers passed over it. It’s a real shame, as Martial Masters is amongst the best titles that the Taiwanese manufacturer has released.

Martial Masters was originally featured in issue 128 of Retro Gamer as part of The Unconverted, alongside additional IGS games Knights Of Valour and Grand Tour. To read about them, pick up a digital copy of the magazine at GreatDigitalMags.com today.