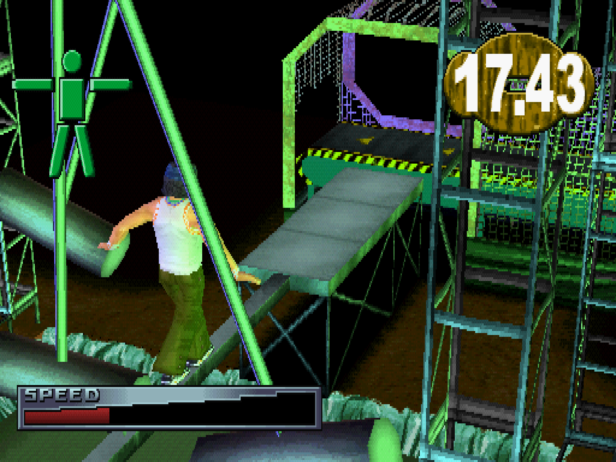 I’ve always loved televised pseudo-sports. Ever since I first watched the likes of Hunter and Lightning humiliating the nation’s fitness fanatics on Gladiators, I’ve gone for everything from the predetermined pugilism of pro wrestling to the slapstick obstacle course nonsense of Total Wipeout. With that in mind you’ve probably already guessed that I’m a fan of Ninja Warrior, and particularly the original Japanese version known as Sasuke in its homeland. So you can imagine my delight when I discovered that there was a whole series of licensed games based on Muscle Ranking, and that its spin-off Sasuke was the subject of one of them.

Normally, this sort of tale ends in tears – licensed games are normally duds, especially ones based on oddball non-sports with no genre conventions to lean on. Thankfully, the game actually turned out to be quite good indeed, mostly because Konami developed it. The developer sensibly applied the Track & Field template to the game, so each part of the course requires a different set of skills, whether that’s button-bashing to build speed or power, or timing your movements along the Spider Walk. It’s also quite an attractive late era PlayStation game, running at a high resolution and capturing the atmosphere of the show well, particularly with its use of signature camera angles.

However, the thing I really didn’t expect was the main mode, which allows you to create a character and guide them along the road to the show. You’ll have to manage their diet and budget to build their stats in a training regimen comprised of mini-games, all the while keeping tabs on stress levels. Unfortunately, that’s the biggest barrier to enjoying the game – if you can’t work your way around a Japanese menu and figure out which meals will help with strength training or reduce your stress, you’re going to be stuck playing in Practice Mode. But if you do have the required language skills and you’re up for a twist on the old multi-sports formula, Muscle Ranking: Road To Sasuke could be as pleasant a surprise for you as it was for me.