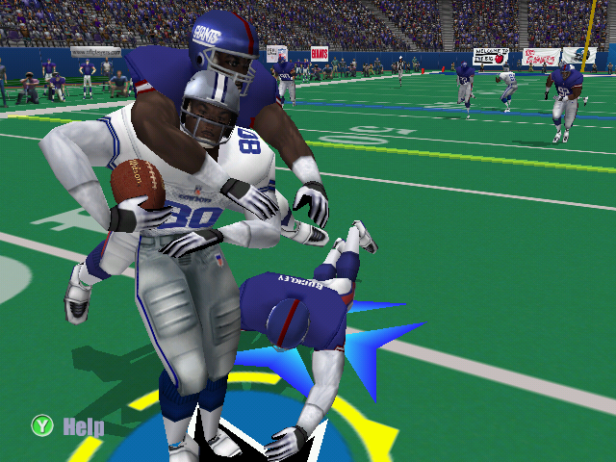 To be completely honest with you, I didn’t care at all about NFL 2K when I bought it. I wasn’t really into American football and the last videogame version I’d played was Madden NFL 94 on the Mega Drive, but the seller threw the disc and manual in as a freebie with the copy of NBA 2K I actually wanted. At the time, I was running a Dreamcast website so any extra review fodder wasn’t to be sniffed at, but I didn’t see myself playing it much beyond that. Of course I am a spectacular fool, and had no idea that the game was excellent and had been very highly regarded the US press.

It was a bit of a struggle to get used to it, as the way plays are selected with the analogue stick is a bit funky and I wasn’t familiar with the rules beyond “you’ve got four goes to move the ball ten yards.” Thankfully the game starts you out on Rookie difficulty, which lets you get into the fun of the game – big meaty dudes, fully decked out in body armour, smashing into each other like shoppers fighting over the last big TV on Black Friday. Boy, do they ever hit hard too. You’ll see arms wrapped around heads, players dragged down by the ankles and even full body slams, and plenty of other similarly impactful tackles.

It was exactly that sense of brutality that made the game a hit with my friends, too. Playing together on the same team, we eventually figured out that you can’t just clobber a receiver (that’s called “pass interference,” folks) and managed to develop a respectable level of co-operation that allowed us to win games. We did have to pick the Broncos to do it though, and I was later informed by some American football-playing housemates that this was tantamount to cheating. Still, we had so much fun with it that I actually ended up spending way more time with NFL 2K than I ever did NBA 2K, making it a powerful argument for giving every game a chance.