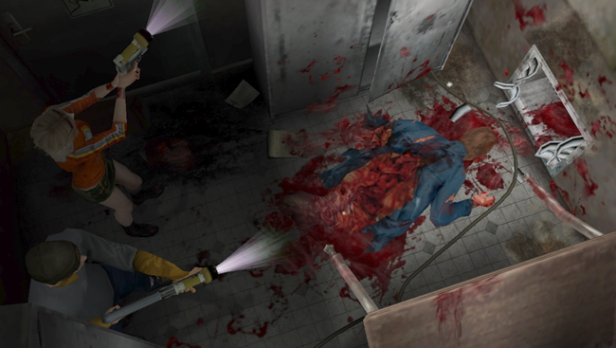 Obscure is not an amazing game. It has clunky controls, a silly plot and some rather bland monsters for a survival horror game. This oddity for the PC, Xbox and PS2 is certainly worth your time however and not just because it takes around 6-7 hours to complete.

Obscure is worth investigating because it actually tries to do things that are a little different to the average survival horror game. The action of Obscure takes place in a school, instantly calling to mind films like The Faculty, something few of games in the genre have really tried. An epilogue sees a young jock investigate a strange figure, only to get trapped deep in the school’s bowels. It’s a good scene setter, but also serves as a tutorial, allowing you to get to grips with Obscure’s various mechanics. The action then switches to the missing boys friends and family who decide to find out why he’s gone missing and get trapped in the creepy school. And it’s here that you start to realise that Hydravision’s game is a little different to its survival horror peers.

The most obvious difference in Obscure is that it’s a proper co-op game, allowing you and a friend to explore the school together. Games like Resident Evil 0 certainly beat Obscure to the punch, but it’s done far better than in other earlier games and still holds up well today. Play on your own and you can choose from any of your surviving friends, all of who have their own unique skills. You can switch between them at any time, lend them equipment, heal their wounds and perform various other tasks. Any that aren’t being used stay at various checkpoints and you can instantly move back to them, which saves backtracking down already-explored sections of the school.

Additional touches include a character who will remind you of where you need to go next, another who highlights if there’s still items to find or puzzles to solve in a particular area (which saves a huge amount of time) and the ability to use items to smash windows, doors and glass, which will let you get access to items or help defeat Obscure’s many enemies. As with the later Alan Wake, Obscure’s monsters are sensitive to light. It’s actually possible to tape flashlights to the various guns you find lying about the school, which will allow you to use concentrated beams to slow down your opponents, allowing your friend or AI controlled helper to loose of some deadly shots. There are even light grenades later in the game that can greatly turn the tide in your favour.

Aside from its enjoyable co-op mode and its interesting (but underused) light mechanics, Obscure doesn’t really do anything that revolutionises the survival horror genre, which is probably why so many people have seemingly forgotten it. It’s not particularly gory, there are few jumpy moments, and the dialogue is truly abysmal. And yet you’ll stick with Obscure to its brief end, as there’s very little like it around. Oh, unless you include the sequel we haven’t played that was released in 2007…