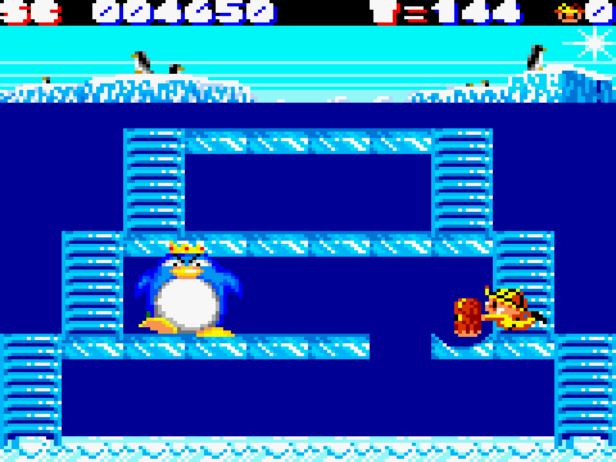 One of the things I really love about the very early days of console magazines in the UK is the prominence given to import games. Rather than being confined to their own small section at the back of the review pages, they were given equal billing with domestic releases, which meant you’d get to see all sorts of weird and wonderful stuff that might never even make it over here. The Berlin Wall was one such game that I saw in a hand-me-down copy of Sega Pro. I thought it looked very cool and the review suggested it was great, but I had no opportunity to play it at the time as I got my first handheld console about a week before the end of the Nineties.

For those of you expecting some Cold War shenanigans, forget it – while the original arcade version was full of digitised photos of that major moment in political history, The Berlin Wall on Game Gear has absolutely nothing to do with its real life namesake. Well, unless historians have lied to me and there really was some bloke with a hammer getting chased around by penguins. I don’t know, I was a toddler. Anyway, it’s one of those puzzle platform platform games in the tradition of Lode Runner and Space Panic, in which ladders are crucial for movement and you defeat enemies by smashing the floor away to trap them. Apart from looking quite a lot nicer than those older games, The Berlin Wall includes modern elements like boss battles, and it makes things a little easier on the player by making enemy movements more predictable. There’s even a neat little combo mechanic – if you smash one enemy through the floor, it’ll take out any enemies it falls on too.

Sadly, The Berlin Wall never officially made it to UK shelves. In fact, even though a North American version was not only planned but advertised in magazines, the game never made it out there either. That’s a real shame, though you really don’t lose much when you play it with Japanese text, so it’s worth a look regardless.