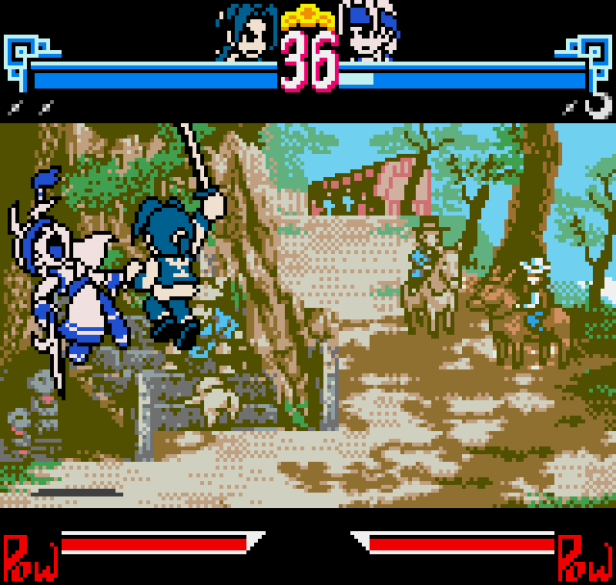 Fans of SNK’s arcade output are probably familiar with The Last Blade and its excellent sequel, which wowed on the ageing Neo Geo hardware before doing the rounds on the consoles of the day. However, even those who owned a Neo Geo Pocket Color could be forgiven for missing The Last Blade: Beyond The Destiny, as it was unfortunately caught in Aruze’s sudden withdrawal of SNK products from non-Japanese markets. The European version barely made it out of the door before being recalled, and the planned US release was cancelled despite cartridges already having been manufactured. While many of the cartridges have since resurfaced due to SNK’s 2001 bankruptcy, it’s fair to say the game missed its time in the sun.

That’s a crying shame, because The Last Blade is one of the most impressive handheld fighting games of its era, and manages to stand out despite fierce competition on the system. Like the arcade games it’s based on, The Last Blade employs a fighting system which prioritises rare, strong hits over long flurries of mild attacks – it’s better to bide your time and wait for an opening to apply pressure, especially since a well-timed parry will leave you exposed. The great fighting is only elevated by the surrounding package – you can buy scrolls which unlock goodies including characters, which elevates the game from a version of The Last Blade into a version of The Last Blade 2. Additionally, The presentation is some of the very best on the system, with beautiful art and nice pre-match introduction scenes. If you’ve got a Neo Geo Pocket Color and you haven’t yet tried The Last Blade: Beyond The Destiny, correct this soon – it’s truly worth it.

If you missed SNK’s short-lived handheld the first time around, you can pick up a digital copy of Retro Gamer issue 20 via GreatDigitalMags.com to read the complete history of this fascinating failure.