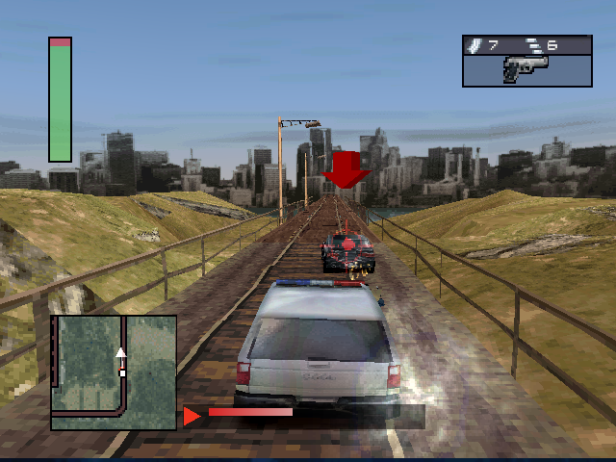 The original PlayStation fell from the radar of most gamers far too quickly. While many stuck around past the release of the PS2 for Final Fantasy IX, once the likes of Gran Turismo 3 had hit most gamers and the original grey box had parted ways. It’s a real shame, as games like World’s Scariest Police Chases got rather unfairly overlooked as a result.

Once you’ve passed basic police training, World’s Scariest Police Chases is set up rather like the TV shows. Narrator John Bunnell introduces each case, giving you your objectives and scenario. From there, it’s your job to chase the criminals through the open city environments that are rather reminiscent of those found in the Driver series. Where the game goes beyond its peers is in its usage of the police theme to its full effect – you’re able to use firearms in some cases, and criminals will often try to dispose of evidence as you pursue them, leading to mad dashes to recover the items that have been tossed overboard.

While it’s tempting to compare the game to Driver because of the technology involved, you’re usually not evading other vehicles in World’s Scariest Police Chases – you’re hunting them down and taking them out. As such, it actually feels like a more modern take on Chase HQ and particularly its sequel, Special Criminal Investigation. If you’re a fan of those games, the Saturday afternoon schedule filler itself or simply a good mission-based driving games, we’d thoroughly recommend World’s Scariest Police Chases.

If you’ve never played World’s Scariest Police Chases, you might have missed out on some other classic PlayStation games too – in which case, you’ll want to pick up Retro Gamer issue 137 from ImagineShop.co.uk or GreatDigitalMags.com for a guide to the system’s hidden gems.