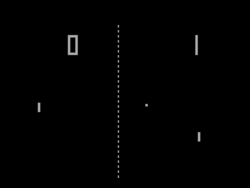 OK, here’s a challenge. Before you read much further, I want you to try to set aside everything you know about videogames.  Yes, it's very difficult. But to really understand Pong, you have to bring your mind back… to the early 70’s.  You need to think of video games in the way cavemen would approach a car.  With confusion, curiosity, and a fair amount of fear.

No, Pong was the first successful coin-operated video game.   Sure, it wasn’t terribly original – a very similar game was first played at a science lab in 1958.  And the Magnavox Odyssey featured a Pong-like game.  But the former would only have been played by a few science students, and the latter suffered from the perception it would only work with Magnavox brand televisions.  As far as most members of the public were concerned, Pong was “the original” tennis game, and it reaped the benefits.

Most RG readers would know the story of Pong’s first “location test” at Andy Capp's Tavern in California.  The owner called Al Alcorn (the engineer behind the game) to complain it was broken.  Al opened the machine to find the sheer number of coins (from players) had jammed the credit switch.  Early in 2008, I was lucky enough to interview Al, and asked him what his first prognosis was, when the bar owner called.  Did he have a theory as to what went wrong?   “You gotta understand, the Pong prototype was fabricated with the most primitive, crappy tool.” Al explained. “It was a piece of vectorboard, with wire-wrap sockets all daisy-chained.  So the idea that it RAN for 3 or 4 days WITHOUT breaking was surprising!”

So, Pong wasn’t complex, or glamorous in it’s development, or presentation.  But – it wasn't scary. And it could be easily understood. And that’s all it needed to do.

35 years later, they said the same things about Wii Tennis.