Ridley Scott influenced video games more than most think. In the 1980s, there were a slew of games that took on heroines and made them fight H.R. Geiger inspired monsters. While Metroid gave Samus Aran a recognizable position in gaming history as a female who didn’t need to be saved, she wasn’t the only woman of video game land who fought aliens. So begins our review of Alien Syndrome, a Sega arcade game that was simplistic in design yet addictive enough to appeal to all ages.

Alien Syndrome, released in 1987 to arcades, has more in common with James Cameron’s sequel than anything else. Aliens was released in 1986 to rave reviews, and Alien Syndrome followed suit with two very similar lead characters. You choose from Ricky and Mary, two characters who are gender-related to Aliens Michael Biehn and Sigourney Weaver. The game has little story implemented, though it’s still clear that Aliens was the inspiration based clearly on the look and feel of the game.

There’s no clearer evidence of this than the boss fights. These are some really ugly creatures, and would truly fit right into the movie’s villain library. The first boss is a giant purple brain with a smaller yellow brain with a face stuck inside. Just for good measure they decided to throw an additional green alien inside. Bosses just get more grotesque an obtuse. One boss just looks like cut up post-digested meat particles. Another looks like a skull and eyeball mated. The final boss is just horrific looking: Ears that look like female reproductive organs, an old man’s chin and mouth, with a floating pruned face for a nose. Like I said, H.R. Geiger would’ve been proud.

Control-wise, the game is tight and fresh, with eight-way joystick action. Guns can be changed out, depending on what powerups are grabbed from the walls. The screen is top-down, similar to Zelda, however, there’s no loading from screen to screen. The entire map is laid out so the gameplay is seamless, which is a nice touch to the feel of being trapped on a series of spaceships with nowhere to go. The overall objective of the game is to rescue a certain amount of prisoners before the timer runs out. Then your hero faces a boss at the end and proceeds to the next level. The enemies multiply at Gauntlet-like numbers. The game has a lot in common with Midway’s fantasy-button masher, except Alien Syndrome relies more on atmosphere than anything else.

The music in Alien Syndrome is haunting; gamers will feel the heavy weight of dread with almost single note thumps of synthesized bass. The spaceship’s cold steel floors feel that much heavier with each note. While the music isn’t memorable for it being catchy, it has more in common with the horror genre, adding suspense and fear to a title that, by today’s standards, really isn’t scary at all.

Alien Syndrome has had many incarnations, but the arcade version still stands as the best one. Though the Game Gear and Playstation 2 remake are often quoted as some of the better versions, the arcade version poured on the fear, design and atmosphere the hardest. Anyone who’s seen any of the Alien movies can tell you that’s what matters most in a media format designed to scare; so dim the lights down and boot up MAME. 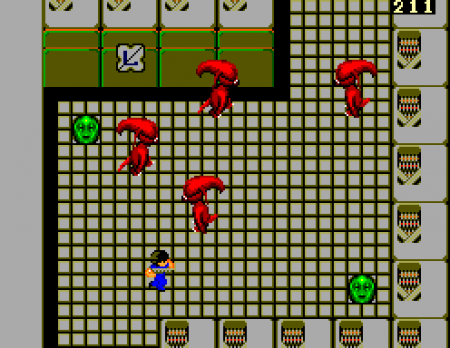 The Master System was something I always knew about as a kid but never owned until much later on. For some reason stores just didn't carry Sega until the Genesis came out, or at least I didn't notice. One thing about it that I did know was that it had great arcade ports of games. Alien Syndrome is another good example of Sega's great work in converting Arcade classics. The controls are pretty spot solid, except for the fact that your bullet stops only a few inches in front of you, but I guess that adds to the strategy. The bosses are difficult and really the only point in the game where I have any kind of challenge. Also, I don't know if it's just my version of the game but I couldn't use my Genesis controllers as the character would just constantly move left. The Master System controller isn't the best in the world but it is decent so it doesn't take away from the experience at all. Either way it's a classic game and an overall fun time.