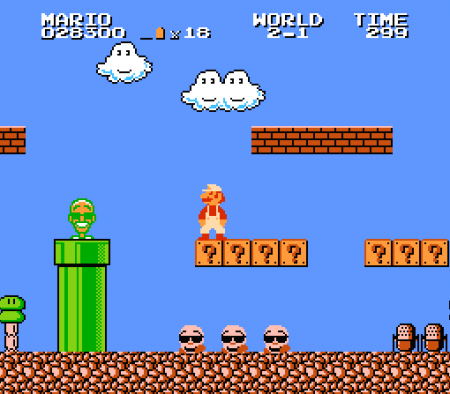 Living in Essex I know nothing about All Night Nippon. Casual Wikipediaing tells me it was/is a popular radio show that did comedy and pop music and this Famicom Disc System game was given away by it.

So what is it then? Well it's Super Mario Bros, with a few bits of Vs. Super Mario Bros. and The Lost Levels thrown in for good measure. Toad, Goombas, floating platforms, Piranha Plants and a few other things have been replaced with references to All Night Nippon and Japanese pop circa 1986. And a slight graphical upgrade.

So really it's just Super Mario Bros+. Which means I don't have to do any reviewing cos everyone knows SMB was a fantastically tight platformer with clever level design and deceptively easy yet deceptively difficult bosses right? Well you do now, and what the address of the rock you live under?

The All Night Nippon remix does nothing to take away all that and adds only a slight amount of ‘wtf’ via it’s sprite replacements. I would think if you got a copy of this and never played Super Mario Bros (which would be virtually impossible as everyone who ever had a NES, even for an hour, has probably played SMB) you probably wouldn’t notice anything was out of place.