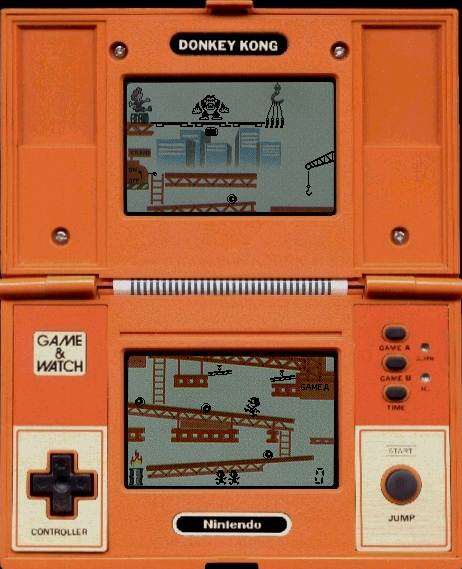 In 1982, long before the days of the Nintendo DS there existed another Nintendo dual screen handheld, and it’s name was Donkey Kong.

These old games (of which this was the first dual screen) used LCD screens to replicate the graphics of the original arcade game, with suprisingly playable results.  Jump the barrels, climb the girders, rescue the girl, kill the monkey.  Great timing was required to catch the swinging hook at the top…

The quality of the game was also matched by the quality of the hardware design, which would run for weeks on 2 watch batteries. The shiny orange cases were so strong that many of these games still survive today.

The entire series of games ran to around 60 unique editions, and millions were sold worldwide, and the rarest can fetch £100’s at auction.

My advice is to do what I did recently, and get yourself on ebay, where you can pick up a Donkey Kong for less than a tenner, and show the kids what a real handheld is all about.