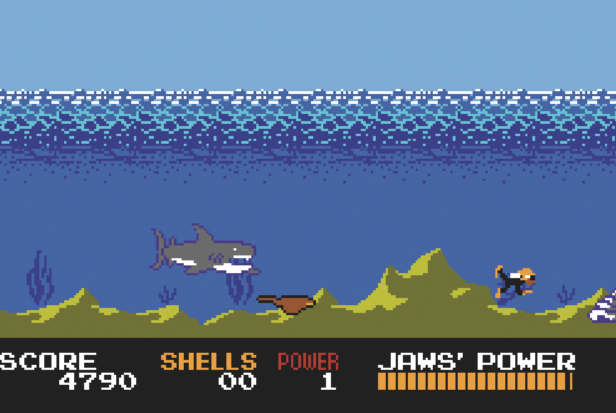 LJN, I hate you. Last issue, you made me sit through your bastard child of Paperboy in Back To The Future; this time you’re forcing me to trawl through the videogame remains of one of my favourite films of all time: Jaws.

First of all, it’s probably wise to clear something up. This game is called Jaws, but is based (very loosely) on the events of Jaws: The Revenge – by far the worst film in the franchise. If the game was called Jaws: The Revenge, I could have probably forgiven its drabness, seeing as the base material was so blatantly dire.

Now, I say ‘loosely’ based on the evidence presented to me on its last boss fight, which I’ll come to in a bit. The rest of the game, though, after you click out of its title sequence, could conceivably be any dim game about deep-sea diving it wants to be.

Basically, according to this game, the plot of Jaws involves swimming around a harbour, blasting poor defenceless jellyfish and stingrays in the face with a harpoon, looting them of their ‘conch shells’ and crab-shaped possessions like some kind of aquatic mugger.

With these peculiar treasures in tow, you must travel to a compass on the game map and trade your booty for hi-tech equipment before venturing out to collect more shells to power up your harpoon attacks. The game finishes when you’re strong enough to take on the giant sea beast.

If you try and take on the titular fish while your man is at the power of two, it will take a million hits to knock down one slither of health bar, and when your time runs out, its health will be annoyingly replenished. This means Jaws involves a lot of fishing, a lot of pillaging, plenty of shopping and plenty of pointless giant shark confrontations that lead nowhere.

It’s the battle with the final boss once you’ve powered up fully when a frustrating first-person re-creation of the face-palming ending of Jaws: The Revenge flashes up. You have to try and cause Jaws to bolt out of the water so you can impale him with your bowsprit. Fail in your mission, though, and it’s back into a drink of monotony you go.