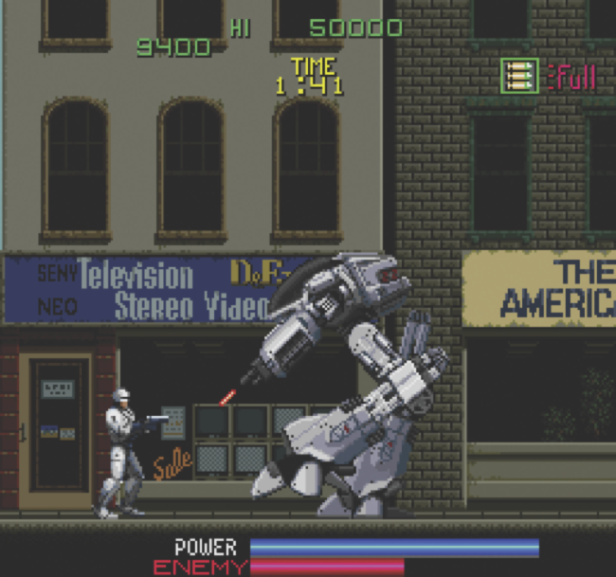 Few movies before and since 1987 have broken the mould like RoboCop. Granted, there have been plenty of violent sci-fi films; plenty of satire, too. But combining them both while interweaving a bleak future where corporations play an omnipresent role in the lives of ordinary citizens, together with a wicked sense of humour, created an unexpected hit. Oh, and don’t forget the blood. A lot of blood. Reportedly turned down by practically every director in Hollywood, even the man whose sole major English-language credit was the medieval tale Flesh & Blood, almost let the film’s script slip through his fingers. Only a second glance convinced Paul Verhoeven that there was the opportunity to create something special.

As with any good film, the script was where RoboCop first began to shine (and as we will find out shortly, was the most important part in the genesis of the videogame adaptation). Written by Edward Neumeier and Michael Miner, its dystopian vision of a crime-riddled Detroit, peppered with acerbic news reports and advertisements gave the movie a thrilling beating heart to go with its sci-fi action. And as with many licences, all Ocean had to go on when making its decision was a sheaf of paper and ink.

But what a script. Not only did the story contain several set-pieces that stood out as potential scenarios for a videogame – RoboCop also boasted an unremitting parade of violence and gunplay that would leave the game’s designers a relatively simple task of shoehorning the movie into pixelated form. Ocean’s development director and movie buff, Gary Bracey, was first to see the script and read it from start to finish, as he did with all submitted material. Gary slapped a yellow post-it note on the manuscript and sent it to Ocean co-owner Jon Woods. The note was as succinct as it was plaintive – ‘We should get this – it could be a winner!’
Fortunately, the software house heeded Gary’s advice and the licence was acquired, its cheap cost helped by the movie’s comparative low-budget and lack of stars. It was still an early stage for RoboCop the movie; when Ocean secured the licence in 1987, the movie had just begun post-production. During development of the 8-bit games, Ocean had access to production stills for its references to ED-209 and RoboCop itself (as well as the script), before later in the project it finally received actual VHS tapes containing short clips from the movie.

Likely due to the success of the popular brawler Target Renegade, Ocean reunited the team of coder Mike Lamb and graphic artist Dawn Hollywood (at the time, Dawn Drake) for the Spectrum and Amstrad versions of RoboCop. On the other major 8-bit platform, Commodore 64, coder John Meegan (Short Circuit, Slap Fight) and artist Stephen Thomson teamed up for the first time with Jonathan Dunn providing the iconic music for all three versions. “I used to enjoy redoing box artwork and I spotted an American movie mag with some screenshots of an upcoming movie called RoboCop,” Stephen recalls. “I loved the design so did a Commodore 64 map of one of the images. Fast-forward a few months and I was at CES in Earl’s Court trying to get work. I turned up at the Ocean stand and asked Gary Bracey to take a look at my work. By pure chance, they were showing off their latest licences, one of which was RoboCop. I showed Gary my RoboCop loading screen and got the job on the spot!”
For his first game in the industry, Stephen is rightly proud of RoboCop; but like everyone else he was under a punishing schedule. Ocean needed to get the game released as quickly as possible due to excited word-of-mouth in America. “It was always about the timescale,” says Spectrum artist Dawn. “And deciding what elements would make a good game and then how to fit everything in. We watched the clips a lot and spent hours over stock photos.” Gary Bracey himself admits the team were under stress. “Every game can be improved and you can spend months working on details and tweaking. However, given the tight timeframe, the teams did an incredible job. I don’t think they could have done a better job given the time.”

The design of the game on the 8-bits would follow a set template despite any differences in technology. Starting after the bloody demise of Detroit cop Alex Murphy and his resurrection, RoboCop begins with the title character patrolling the streets of the city, searching for the gang who killed him, and is portrayed in a standard side-scrolling view with enemy attackers lurking above as well as on the ground. Fortunately, an early design meeting saw these sections punctuated with segments inspired by the movie. Having disposed of a potential rapist in a first-person shooter mini-game, RoboCop high-tails it back to the station to identify one of his assailants who seems mightily familiar and this photo fit section would be used again in the game to break up the stomp-and-gun action. These two parts were Ocean’s attempt to differentiate the game from its arcade cousin, having sub-sold the license back to Data East.

Working on both the Commodore Amiga and Atari ST versions was Ocean veteran Peter Johnson. Having begun his career writing arcade conversions such as Yie Ar Kung Fu and Arkanoid for the BBC Micro, Peter also converted the latter, and Wizball, to the 16-bit machines. A true all-rounder, he created the code, graphics and sound for both these versions of RoboCop, and was fortunate to catch the movie prior to commencement. “It was essentially a port of the 8-bit and coin-op versions,” explains Peter. “I was also loaned a suitcase version of the arcade game to work from, a VHS video of it being played from start to finish and either the Spectrum or Commodore 64 version for the extra bits they added.” The animation of the main sprite was created as Peter ‘drew’ over the Spectrum’s graphics in a style matching the arcade game. However, all the background graphics were redrawn using the arcade machine as a reference. With Peter’s expertise and experience with the Atari computer, and the Amiga still gaining popularity, the latter was a port of the former, although both versions of the game are the ‘prime’ versions of RoboCop, containing the best elements from the previous games, with a few cutscenes thrown in for good measure.

With an estimated budget of $13 million, RoboCop’s opening weekend reaped $8 million in US box-office receipts. Word-of-mouth increased its final tally to over $53 million, a figure which, when adjusted for inflation, equals almost $120 million, eclipsing 2014’s sterile remake. The movie was a moderate success in UK cinemas and it became a bigger hit on home video in the winter of 1988, serendipitously coinciding with the release of Ocean’s 8-bit versions of the game. “I liked the finished game and was proud that Mike and I had managed to capture different aspects of the film such as the hostage situation and photo fit,” says Dawn. “Jonathan Dunn also got the music and sound elements perfect, and at that point it was the pinnacle of my career.” The two-person team also worked together for the C64 version, as Stephen remembers. “Teaming up with Johnny Meegan was brilliant for me. Magazines such as Zzap64! started to mention us as a team and we got a lot of recognition for our hard work. But I have a soft spot for RoboCop, mainly because it was my first game.” But what about the man who was responsible for bringing RoboCop into pixelated form? “At that point it was the biggest game I’d been involved with,” says Gary. “It was the first licence I‘d chosen myself. As for the movie, I loved it when I first saw it!” We agree – RoboCop remains one of the finest action movies and movie videogame licences of the Eighties. Load it up, play it, watch the movie. And stay out of trouble.