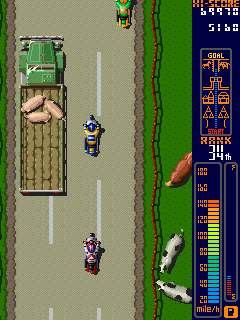 As a child, there was a local dairy not too far from my house that had a few arcade games out the front. Along with the glorious Truxton, they also had Rally Bike. I spent many an hour down there pouring my pocket money into these wonderful machines.

Rally Bike was a top-down racer, in which you would have to attempt to ride the eponymous rally bike to victory across a number of different courses. This was like no rally you've ever seen, however, as all the courses are populated with other motorists and a number of obstacles that you have to avoid in order to survive to the finish line.

An interesting aspect of the game is that you only have limited control over your speed. Your bike has a minimum speed that it can go down to, which means that the screen is always scrolling. This is made even more difficult when you pick up the turbo boost and all hell breaks loose, requiring split second reactions to avoid obstacles.

On top of all the difficulties you're already faced with, the game also throws a diminishing fuel supply at you. Along each course you will occasionally come across a petrol station, which you can pull into. This triggers a basic cut scene in which you see your bike being refuelled along with all of the other bikes annoyingly overtaking you in the background.

One of my favourite aspects of the game is the secrets that you can uncover. The first course, for example, has a ramp which you can launch off of and land on the back of a truck. You can then control the truck and happily smash all the other bikes off the road, which is brilliant fun.

The game can be very unforgiving, and you will often find yourself very frustrated with "unfair" crashes and running out of fuel, but any mistakes you make are really your own fault.

As an added bonus, the graphics and sound are great. Overall, I would highly recommend Rally Bike to anyone who likes a good retro racer!