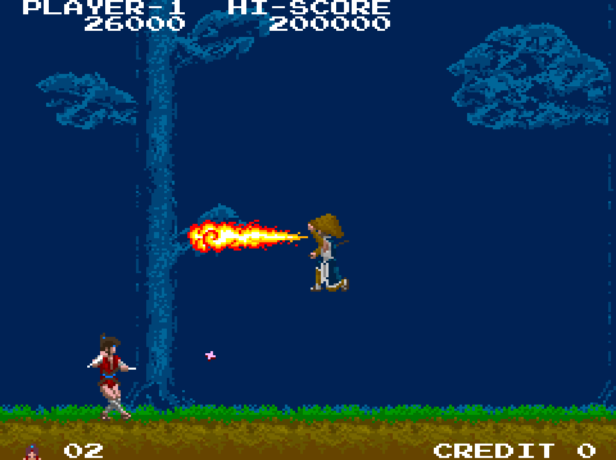 The more I think about it, the more I’m convinced that Taito Legends 2 is one of the greatest compilations ever released. The first volume was full of familiar delights like Space Invaders, Bubble Bobble, Rainbow Islands, Rastan and The New Zealand Story, but the second introduced me to many favourites that I’d never encountered before – games like Cameltry, Liquid Kids, Elevator Action Returns and Cleopatra Fortune.

One game in the package that I became particularly enthralled with was The Legend Of Kage. The plot is simple – Kage must rescue the kidnapped princess Kirihime, by battling his way through a relentless and seemingly endless army of randomly spawning ninjas and magicians. The gameplay is just as simple. You’ll leap through a forest, approach and ultimately scale a fortress, then enter it and rescue the princess before doing battle with a boss. The whole sequence can be done in under five minutes but you can carry on until you run out of lives, and an end sequence plays after every second loop.

While it’s not complex, it does have the benefit of starring a ninja and Taito managed to nail all the key traits a ninja should have. Gaming ninjas should be fast and agile. Kage runs along at a good pace, can leap dozens of feet into the air, and can even climb trees and other objects should he feel the need to. Ninjas should also feel capable of responding to any threat, and Kage can fire shurikens in any direction, even in mid-air. Finally, ninjas should always have some kind of parry move because of how great you feel when you nail the timing, and Kage can use his short sword to parry enemy shurikens. As a result, The Legend Of Kage is a game that doesn’t need meticulously placed enemies or clever level designs – it just feels right, and sometimes that goes a very long way indeed.