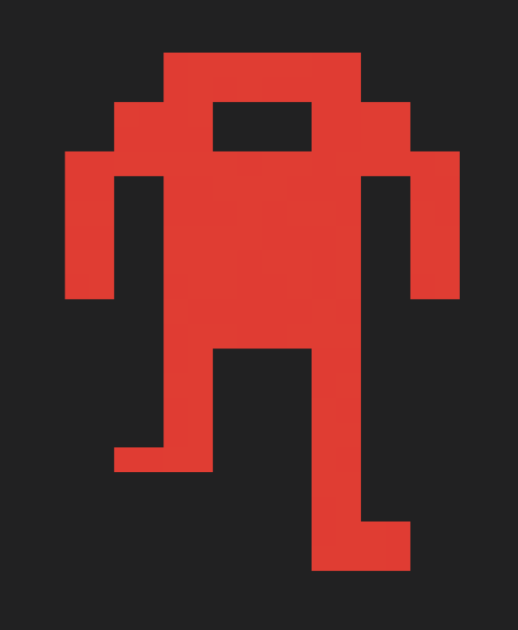 It may look simple by today’s standard, but Stern’s Berzerk was a big deal upon release. It featured fantastic gameplay, innovative ideas and some truly chilling speech. It also inspired Eugene Jarvis to make the amazing Robotron: 2084. Creator, Alan McNeil explains how it all began.

Until Pac-Man’s arrival on the scene, it was Stern Electronics’ Berzerk that held US arcade gamers in thrall. Shifting over 50,000 units – a massive achievement during the embryonic market of 1980 – Alan McNeil’s frenetic eight-way shooter tasked you with leading a seemingly suicidal nutcase around an endless maze full of psychotic robots, every one intent on your immediate and thorough destruction. The droids, determined to make their desires known, bark less-than-welcoming phrases such as “Destroy the intruder”, “The humanoid must not escape”, and, when you think better of your situation and flee through a room’s handy exit, the charming “Chicken! Fight like a robot!” Along with this breakthrough audio – one of the earliest examples of speech synthesis in arcade games – Berserk offered other ground-breaking elements, including rudimentary artificial intelligence, with your robot enemies often making errors (something players can use to their advantage, ‘encouraging’ the droids to destroy each other), and it also arguably heavily influenced Robotron: 2084, which in turn led to the likes of Smash TV and Geometry Wars – a strong lineage indeed. Berzerk’s speech was truly terrifying at the time.

Alan was seemingly fated to end up working on videogames in some form. He notes that he always liked games – playing lots of Mille Bornes and Stratego when younger – but when he was at college, he suddenly found himself surrounded by then cutting-edge equipment. “PLATO – a network of amazing graphical computer terminals for computer-aided education – came to campus,” he recalls. “Because of the size of the network – about 1,000 terminals across the USA – it was the perfect platform to develop the first network games.” Alan remembers chatrooms and forums being born well before the internet’s arrival, and crude but fun games being fashioned, enabling you to play online dogfights, “blasting someone out of the sky who was playing in a different state.”

Once in the field of employment, Alan soon found himself at Bally/Midway-owned Dave Nutting Associates, a group that had already created the arcade games Gunfight and Seawolf. He worked on sequels to both titles, along with Bally Arcade (“the console that should have beaten Atari, but Midway couldn’t build them without zapping the main chip with static, so most units were dead at the end of the assembly line…”), and when it became obvious to Alan that he’d “be working on arcade games forever,” he asked Dave Nutting if he could design his own game. Turned down, due to a lack of experience, and annoyed at being told he wasn’t good enough to do something, Alan began scouring the job ads.

“I already had some primitive games by other people running on my Sol20 [Terminal Computer], including a version of Robots (see ‘We Are The Robots’ boxout),” says Alan. “Robots was clunky, but I thought a smooth-running ‘dodge the robots that are trying to kill you’ game would be cool.” Before long, Alan found an opening – a subsidiary of Stern Electronics required a pinball programmer to work on hardware changes for a licensed Bally controller board. “I asked if I could do a videogame after I fixed the pinball problem, and they said yes,” says Alan, who then rapidly got a prototype hooked up to his Tektronix development system. Trying to kill all the enemies made for some frantic shooting.

Perhaps due to too many late-night sessions with Robots, Alan says he had a dream of a black-and-white videogame with a stick man and numerous robots closing in on him, “It was just a second’s worth of action, but this was exactly what I made for the first pass of my game.” Graphically, the shifty-eyed robots owed something to Battlestar Galactica’s Cylons; and in terms of gameplay, the initial version was like an extremely intense real-time version of Robots. “It was too hard, even with just six robots,” says Alan. “The game favoured the robots too much – they would crash into each other occasionally, but the average game time on one life was about six seconds – not good.”

Although such rapid turnaround would perhaps please coin operators, Alan’s rule of thumb was to take the price of a movie ticket and divide it into pennies per minute, in order to figure out the game time you should expect for a quarter, “Back then, this was between three and five minutes, and so my goal was to enable beginners to last three minutes.” Help was required to beat the robots, and so the protagonist was armed with laser bolts, but still the robots changed paths too rapidly and came at the player from too many directions. Bouncing the player’s laser fire around the screen didn’t help either, since you then had to avoid your own shots and the psychotic robots.

The key to Berzerk, and something that set it apart from Robots, was the addition of barriers. Alan devised a simple scheme for generating mazes. Solid walls, each with a door, were placed on each edge of every room. The remaining space was divided into tiles, and a ‘support column’ placed at every tile intersection that wasn’t embedded in a wall. A wall was attached to each ‘column’, and spun in a random direction. “This mostly resulted in nice maze-like rooms, although sometimes you get a two-by-one box in the middle, and with a robot being placed on every tile, there are sometimes two robots stuck in that space,” says Alan. Alan isn’t too keen on the Atari 2600 port of Berzerk.

To stop the maze from being entirely random, Alan used the x/y co-ordinates of a room as a 16-bit number to seed the generator. “Because of this, you can exit a room, return to it later and see the same room,” explains Alan. “It makes the universe more real if you leave somewhere and return to an identical layout. Totally random rooms aren’t immersive – your brain goes ‘huh?’ – and a robot would be able to shoot you from a place where it couldn’t be before, and you’d get angry at the game.”

Despite these improvements, Alan still considered Berzerk flawed, “It was smooth and fun, but the robots would all open fire at once, and were deadly accurate. Also, there were robots stuck in the centre sections that you couldn’t shoot, and there was no incentive for players to move on once a room’s robots were eliminated.” Due to using the Robots device of destroying enemies that collided with each other, Alan decided the real problem with stuck robots was if there was just one of them – with two, you could at least manipulate them into blowing each other up. Enter Evil Otto. This psychotic bouncing face (see the ‘Have A Nice Day!’ boxout for more on his origins) appears if you spend too long in a room, coming straight for you (thereby removing the ‘hanging around’ issue), but with the positive side effect of potentially stomping inaccessible robots in his quest to smash you.

By this point, the game was largely the Berzerk we know today – at least in terms of basic gameplay. Subsequent changes first involved adding bullet progression, over time gradually upping the number of robot bullets available. “I made the game keep track of the rooms you left after killing robots, and used that count to drive the number of robots’ bullets,” explains Alan. “It made it seem like the robots were going from peeved to angry to berserk with rage.” Various settings were tried and tested with players of varying ability, in order to get the balance right and to achieve Alan’s target of a (minimum) three-minute game for beginners. Keep running, otherwise Crazy Otto will get you.

The robots’ movement was also amended; with their speed being increased as the levels progressed, and said speed being matched with the animation of the robots. “I didn’t want to see any feet sliding along the ground – after all, I got my degree in design partially by doing seven minutes of animation,” jokes Alan. On a more serious note, he explains, “To get someone immersed in a game, there cannot be cognitive dissonance – no ‘that doesn’t seem right’ moments. Therefore, ‘glide walking’ was scrapped, and I ensured that although the robots on the early levels spin their eyes slowly, the ones on the later levels spin like the enraged enemies they are.”

To further assist players, the registration points of the art were amended. “Games track by x/y points – the registration point is where the ‘0,0’ point of an object is,” explains Alan. “I tweaked the robots so that their shooting was just barely good enough to hit you. This enabled you to dodge bolts if you were careful.” The exception to this rule was when a robot was coming right at you from the left or right. However, the design of the main sprite has a small gap between the head and body, which led to seasoned players inventing and taking advantage of the ‘bulletproof bow-tie’ trick. “When you run, the man’s body moves up and down, but during testing we had one amazing player that could stop for just long enough to let the bolt pass through his neck and then move on – while fighting at the highest level,” recalls Alan. “He practised kung fu and consistently got high scores!”

Despite all of the fine-tuning that went into Berzerk’s gameplay, it was another element added during development that proved one of the game’s most memorable components: speech. While frantically battling for your life, your metal-clad adversaries continually bark threats and warnings, and insult you should you decide to run rather than stand and fight. Alan notes that the game originally had pinball-type sounds – one or two counters connected to an amplifier. “If you put in a small number, it would make a high-pitch square wave. A big number would take longer to count down to zero, and so the resulting sound would be lower in tone,” he says. Apparently, this system was so basic that it was just about impossible to even craft a simple tune with it, but as Alan and the company had used the scheme in pinball for a year, he already had a number of ‘zappy’ and ‘tweepy’ sounds in his program library.

You can read the rest of our Making Of Berzerk in issue 47. Buy it now from GreatDigitalMags.com