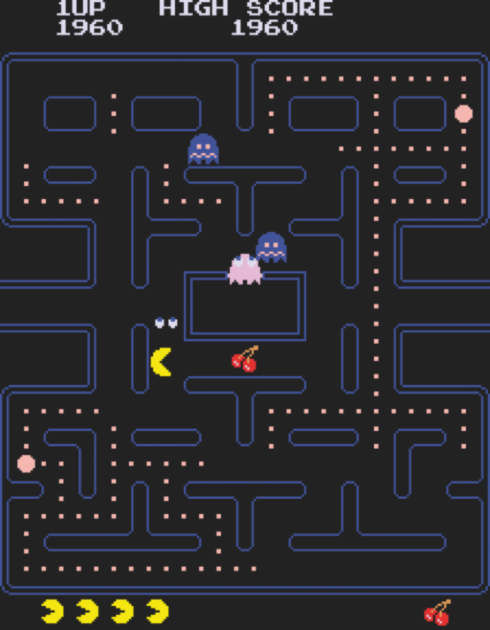 In 1980 one arcade game ruled supreme and that game was Pac-Man. Created by Toru Iwatani, it delivered a pleasing alternative to all the arcade games that focused on killing aliens and other monsters and required you to have a keen eye and great reflexes to escape the ghosts that continually pursued you. It helped popularise the maze genre and was followed by countless sequels, making it one of Namco’s most successful game franchises. Here, Toru Iwatani reveals how it all came to be.

With modern-day game characters often being designed and scripted to ape Hollywood movie stars, it’s pleasing to note that a yellow circle with an insatiable appetite remains the most enduring videogaming star to date. After all, which gamer hasn’t played some variant of Pac-Man? According to a May 2008 report by the Davie Brown Celebrity Index (dbireport.com), which scores celebrities to evaluate potential product spokespeople, Pac-Man was recognised by 94 per cent of US consumers, outstripping even Mario. Pac-Man’s appeal is, ironically, akin to Hollywood heavyweights like Tom Hanks and Will Smith. Every ghost has its own attack patterns, creating rudimentary but effective AI.

Part of this appeal is no doubt down to the fun, peaceful nature of Pac-Man and his actions. He explores a simple maze, munching dots, pursued by a quartet of cartoon ghosts. When Pac-Man eats one of the maze’s four power pellets, the ghosts turn blue and flee, having suddenly become edible and decidedly non-threatening. However, even when a ghost is consumed, its eyes ‘escape’, hastily retreating to the central ghost pen, whereupon it’s reborn.

This gentle, good-natured gameplay was no accident, as the game’s designer Toru Iwatani explains. “In the late Seventies, videogame arcades, which in Japan we call ‘game centres’, were just playgrounds for boys, and the only videogames on offer were brutal affairs involving the killing of aliens,” he remembers. “My aim was to come up with a game that had an endearing charm, was easy to play, involved lots of light-hearted fun, and that women and couples could enjoy.”

Iwatani started thinking about videogame ideas in which the key word was the verb ‘eat’. And, yes, the pizza rumour is largely true – suitably, while at a lunch, a fast-food favourite forever changed the course of gaming history. “With ‘eat’ established as the key word, a shape caught my eye,” recalls Iwatani. “I had ordered a round pizza, and it was missing a piece.” In a ‘eureka’ moment, Iwatani says, “the shape of what is now Pac-Man flashed through my mind.” Giving enemies distinctive names was quite unusual in the early Eighties.

Even in those early gaming days, videogame characters had a little detail, but Pac-Man was forever destined in his first incarnation to remain a yellow disc with a basic mouth, like an incredibly simplified version of Iwatani’s lunch. He notes that some suggested at the time that other components should be added, such as eyes, but then there would be no end to the additions. “As design concepts, both Pac-Man and the ghosts have a simplicity and endearing charm,” Iwatani says of his decision to keep the graphic design streamlined, also suggesting that the visuals of the game helped it appeal to female gamers of the day.

The elegant clarity of the character design also influenced the game itself. The food for Pac-Man to eat was initially strewn all over the screen, but Iwatani was keen to ensure gamers would immediately know what to do. “I wanted to simplify gameplay operation, and so the idea occurred to me of constructing a maze in which movement was restricted to the four basic directions – up and down, left and right,” he says. With this structure in place, the game’s objective became more obvious, and the lead character soon gained his moniker, ‘Pakku Man’, based on Japanese slang ‘paku-paku’, which describes the sound of the mouth while eating. (The original game’s title subsequently became Puck Man. The US publisher, Midway, renamed it Pac-Man to stop wily hoodlums amending the ‘p’ in ‘puck’ to an ‘f’.)

With the game’s basic content dealt with, Iwatani realised it wasn’t yet much fun, and so enemies were added to the mix, providing tension and excitement, and making it a challenge for players to grab food from the maze. Unusually for the time, Iwatani not only developed rudimentary artificial intelligence for the ghosts, but ensured each one had its own personality of sorts, due to moving and attacking Pac-Man in its own way. “The adversarial TV cartoon Tom And Jerry helped shape the relationship between Pac-Man and the ghosts,” recalls Iwatani. “Had the programming been such that the four ghosts constantly attacked Pac-Man’s present location according to the same algorithm, the ghosts would look like a string of beads. Where’s the thrill in that? So I introduced AI-type algorithms that had the ghosts coming at Pac-Man from all directions.” Pac-Man poses with his creator.

And so we were introduced to Blinky, Pinky, Inky and Clyde (Akabei, Pinky, Aosuke and Guzuta in the original Japanese release). According to Iwatani, the ghosts attack in waves, before dispersing and attacking again, which gives the player some regular breathing space and appears more organic than the kind of incessant attacks that had plagued earlier arcade games like Space Invaders. (Over time, these waves are harder to identify, and the ghost attacks become swift and relentless, somewhat contradicting Iwatani’s desire for a non-stressful game, but providing a necessary long-term challenge for seasoned players.) Although gamers often disagree with exactly how the algorithms work in practice, Iwatani has in the past stated that Blinky is designed to chase Pac-Man, but that Pinky’s goal is to aim just in front of Pac-Man, hence why the two often seem to ‘sandwich’ the hero. The movement of Inky and Clyde is more random, the end result being that Pac-Man is pursued in a natural way, rather than in a robotic, pre-defined manner.

The attacks aren’t entirely one-sided, however; as noted earlier, the maze contains four power pellets, which temporarily transform the ghosts into a ‘scared’ blue form, enabling Pac-Man to turn the tables, hunt and eat them. “The inspiration for the power pellet was the spinach in the TV cartoon Popeye,” explains Iwatani. “The power pellets didn’t exist in the planning stages at all – they emerged during the development stage as a feature for turning the game around, and made the game vastly more interesting.” The official Atari 2600 port is awful and many feel it was partly responsible for the videogame crash of the early Eighties.

Although the completed Pac-Man ended up shipping well over quarter of a million units, Iwatani notes that the game’s impact wasn’t immediate: “In Japan, the game met with a lukewarm reception at first, but it then proved to be a long seller over several years.” Amusingly, its success in the USA also took people by surprise, with ‘experts’ of the time judging Rally-X to be 1980’s game to watch. However, Iwatani’s ability to attract all kinds of gamers, rather than just teenagers keen on blowing up aliens, hit home. “Overseas, it was a massive hit – people who normally didn’t play videogames became avid fans, and there was much media coverage of the playing of Pac-Man,” he recalls.

The game has also stood the test of time, being converted to myriad platforms, and it regularly appears on compilations and various online services to this day. “I designed the game so that players of any age and either sex could play it straight away, without reading a game manual,” says Iwatani of his creation’s enduring popularity. “The game also contains numerous detailed stratagems for reading the players’ psychology.”

Perhaps unsurprisingly, Iwatani claims he’d not revise his game, given the chance to go back and do so. “At the design stage, there was a ‘shutter’ feature, which opened and closed, acting as an obstacle in the path of the maze,” he says. “But I’d change nothing from the final game. Why? Because Pac-Man is complete to such an extent that to add or to subtract anything at all would be unacceptable.”

You can read the rest of our Making Of Pac-Man in issue 61. Buy it now from GreatDigitalMags.com