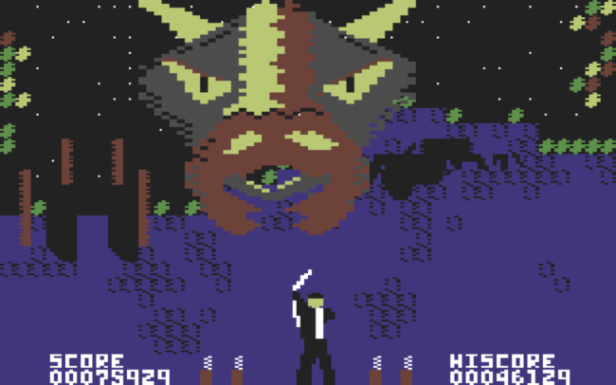 Parallax scrolling; enemies that react to your actions; a 3D environment that progresses from day to night; a gripping, context-sensitive soundtrack that changes as events unfold; action, tension, monsters, and gore. These elements are commonplace in contemporary videogames, but were revolutionary in the early Eighties; and yet they all appear in Paul Norman’s debut, Forbidden Forest. Well-received at the time, the game has gained a cult following in recent years, not only due to its then-innovative features, but also because of its all-engrossing gameplay and atmospheric soundtrack, which urges you on. Based in the forest of its title, Forbidden Forest finds a lone archer in a twisted woodland at dusk, charged with hunting down and killing the evil Demogorgon. Armed with a bow and a limited number of arrows, he must dispatch many of the Demogorgon’s minions and then face their master. Failure means certain (and gory) death… Look out! It’s a deadly spider.

For the game’s genesis, we must travel back to the summer of 1982. Paul Norman was hammering away at a keyboard at a company called Synchro, oblivious to the chaos going on around him. He’d started dabbling with computers after 15 years as a guitarist for various bands. “I happened upon a VIC-20 in a music store, and as a life-long sci-fi fan, I couldn’t resist,” explains Paul. After mastering BASIC, he created his first game, Psychophants, and then an Asteroids clone. Soon after, Paul spotted an advert in a newspaper for videogame programmers. “I showed Synchro my games, and they asked if I had used ‘machine language’ – apparently, my BASIC trickery worked fairly well,” laughs Paul. “I admitted I hadn’t, said I was studying it, and was offered a job.”

The next day, Synchro plonked a C64 in front of Paul, and suggested he get started on a ‘bow and arrow’ game, in ‘machine language’. “I’d never seen a C64 before, but over the next month, Forbidden Forest and my knowledge of coding grew together,” recalls Paul, who rapidly started adding movie-like elements to the game. “The guys at the company just wanted a target game with a bow and arrow,” recalls Paul. “I wasn’t interested in that – I’m a movie buff, not a gamer, and there’s no movie in that idea.” Therefore, Paul did everything to make the game akin to a movie – hence the forest, monsters, music, and lighting. Comic relief was added, too, notably for the ‘dancing archer’, seen between rounds (a source of arguments amongst long-time C64 fans, who disagree about exactly what the archer is doing). Paul says: “I’m happy to clear this up: he’s dancing – not because he’s cleared the round, but because randomly running all his postures for a moment with some music was funny!” The graphics of The Forbidden Forest really impressed at the time.

Some humour would likely have been welcomed by Synchro at the time, as the company was going bust. “I tend to focus at times and not notice the world is collapsing around me,” says Paul, and he was focussed squarely on his game when Cosmi’s George Johnson arrived to buy the furniture from Synchro. “He bought me, too,” quips Paul, remembering the day his game moved to its permanent home. “He kind of had to – I was still working at one of the desks!”

By this time, the game was about three-quarters complete. “When I showed Cosmi what I had of the game, the parallax-scrolling got a gasp, and the gore got a laugh from Johnson’s partner,” recalls Paul. “They knew they had something, so I was free to finish it and I could work from home, which was great, seeing as commuting was so inefficient.”

Cosmi’s hands-off approach worked well for Paul, who says he was working instinctively, rather than to a grand plan: “Since I’d never done anything like this before, I didn’t have a ‘style’ or structure to compete with or depart from.” This gave rise to Forbidden Forest’s storyline and content, as Paul explains: “Bows and arrows: I think Robin Hood – unless Indians are involved – hence the forest. The story? That’s Eye Of The Beholder territory. The creature set was fairly traditional, borrowing from the Ray Harryhausen school of drama. And although the frogs were a departure, the Demogorgon was definitely derived from the last scene of Night Of The Demon. Inspiration also came from Jason And The Argonauts and Mysterious Island, and the death scenes were, apparently, entirely logical. “Giant spiders chew your head off. Giant frogs squash you. Spear-wielding skeletons stab you. Giant snakes melt you with their venom. It’s all what you might expect in a forbidden forest,” explains Paul. You don’t want to mess with a dragon.

Although Paul’s understanding of technology improved as the game developed, he suggests there’s a certain amount of ‘smoke and mirrors’ when it comes to the game’s revolutionary elements: “The human brain and senses are very co-operative when it comes to entertainment. I learned this when playing guitar: some things you hear sound very difficult to play, but they aren’t really, just as some things that sound simple are painfully hard to achieve.” Regarding Forbidden Forest, Paul notes that, for example, there’s nothing complicated going on with the parallax scrolling: “The flat forest scrolls repeatedly over several ‘pages’ in a continuous loop, and some smaller, sprite-based trees move a bit slower, behind the forest. After playing with the speeds, the right differential was found to fool the eye.” The illusion of time in the game is largely down to a gradual change of background colours; and Paul created frame-by-frame sprites for anything that required complex movement.

Ultimately, then, Forbidden Forest is a case of ‘less is more’ – an example of how quality results from a combination of great ideas rather than fancy effects. Paul maintains that he didn’t know and couldn’t have cared less what the Commodore 64 was actually capable of anyway: “I wanted what I wanted and I pounded on the thing until I got as close as I thought I could. The hardware limits are obvious to some extent – for example, the graphics are pretty chunky, but, as I said earlier, the brain does the work for the audience. Put enough simple things together, working towards the same effect, and it can look like you know what you’re doing!” Paul cites the music as another example of this approach. When music is added to a movie scene, the effect raises everything to a whole new level, both emotionally and atmospherically. This is no different for a videogame, although few realised this.“ “But it wasn’t rocket science,” says Paul. “The C64’s sound chip made tones, whines, and buzzes. I just used them pretty much as-is, and wrote a melody!”

These elements all combined to create a game that met with great critical acclaim; indeed, it’s credited with putting Cosmi on the map, and even two years after its release, Zzap!64 included Forbidden Forest in its launch issue’s ‘top 64’ (charting a respectable 21st). And three years later, Julian Rignall raved about the budget re-release, only criticising the chunky graphics. Paul suggests such praise is largely down to him never letting equipment determine the end result: “When I create music today, I have Kurzweil orchestral keyboards to play with, but the principle is no different to composing on the C64: equipment can facilitate music but can’t create it – you have to make the music in your head first. And for games like Forbidden Forest, as soon as I made one thing work, I would automatically think ‘what more can I do?’ and keep that up until time and memory ran out.” Attention to detail, according to Paul, is just a matter of what you’re willing to settle for.

You can read the rest of our Making Of The Forbidden Forest in issue 25. Buy it now from GreatDigitalMags.com.