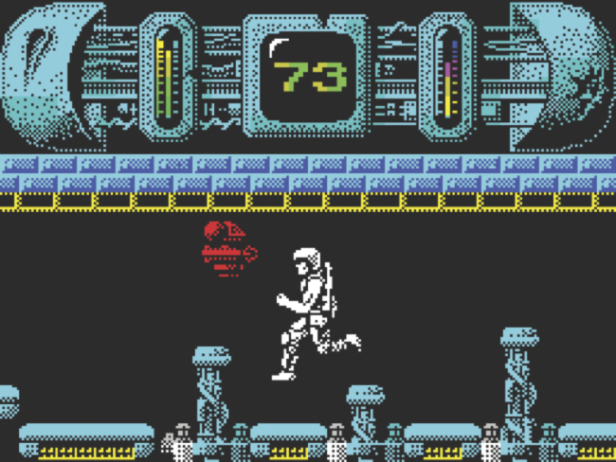 A brief encounter with his school’s ZX81 at the tender age of 13 instantly sold Nick Bruty on computers. By the time he hit 15, Nick dreamed of being a professional games programmer. Although this dream would go unrealised, sprites the teenager produced for a demo coded by school friend David Quinn did help secure employment for the pair. But as Nick explains, he was hired for his artistic skill rather than his coding ability. “David Quinn and I first got into game development at Softstone in Brighton. My brain was more suited to art and design than coding, and I could get so many more projects done than I could being a programmer. Softstone went bust after a year, so we headed back to London. David landed at Probe Software. I think he may have been the first in-house programmer. He was working on a horse racing game and they needed artwork, so he brought me in.”

In the mid-Eighties, Probe Software was a relatively small operation, but Nick has memories of their limited office space accommodating sizable arcade cabinets. “Probe’s first office was in Tooting, London and was tiny. Probe was converting a lot of arcade games back then, and my favourite moments were having the arcades delivered to the office. Often we would get the full-sized four-player cabinets!”

But before joining Probe, Nick and David had started work on a budget arcade title, and the friends ran the idea past their new boss. “I had begun working on Trantor while between jobs. I pitched it to David and he was keen, so we started in earnest thinking it would be a fine budget title. When we started working at Probe, we showed Fergus what we had and he became excited and wanted us to make a full-price game. The ‘Trantor’ name came early; it was a planet in an L. Ron Hubbard book.”
As well as his game’s title, Nick also looked to sci-fi to inspire Trantor’s core alien-blasting gameplay and the backstory to his hero’s mission. “I can’t remember if I made the game after I saw Aliens – if I saw Aliens first then it would definitely have been an influence. I remember one of the first films I saw with David was The Terminator and it blew us both away. I loved the adventure of Star Wars, but the realistic feel of Alien and Blade Runner affected me more. They were dark and scary but entirely beautiful. I was reading a lot of sci-fi back then: Asimov, Arthur C. Clarke. I was no writer, but making the game was a fun excuse for me to write a short story.”

In order to get his ideas on the screen, Nick made use of in-house sprite and level editors rather than laboriously transcribing squared paper designs into hexadecimal code. “In the past, I had used graph paper and hex. Man, that was slow work. Thankfully, David Quinn made a nice sprite editor tool that sped everything up. I made sure David’s tool had animation. It was still a slow process to draw anything as there were no mice or tablets yet; I would draw with my old Atari 2600 joystick. I really didn’t want to go back and modify anything if I didn’t have to – the animation you see in the game is pretty much the first pass I did. I had a very simple level editor. They were very common back then and typically grew in complexity from game to game.”

Prior to Trantor, Nick had created graphics for others that had to fit into a fixed amount of memory, but now his designer status allowed him to favour art over other considerations and to create a cinematic intro. “In my first year in games, I was told how much memory I could use, which was never enough to do what I wanted. As Trantor was my first design, I thought: ‘Screw it. I’m going to blow the entire memory on art and keep the game simple.’ We pulled a trick with the ship. As it was the first thing you see in the game we made sure it was the last thing loaded. It only ever existed on the screen not in memory.”

While keeping Trantor a run-and-gun at its core, Nick embellished his game with as many logistical challenges as memory would allow ranging from flame-thrower refuels to raiding lockers for essential items. “I love action games, but I also like to have some sense of adventure and discovery. [But] I was out of memory and had to settle for simple triggers rather than grand events. I would have loved to have had differently-scaled areas in the game. The close-up view you had would be the sprint between these special areas. At first, these would be straightforward places like hangers and munitions dumps where you would perform some of the logic tasks allowing you to progress. The deeper down in the world, the stranger and more alien things would get.”

To crank up Trantor’s tension levels, Nick gave his game’s hero just 90 seconds to find each stage’s security terminal and retrieve password characters in anagram form, and he turned Trantor’s levels into a sprawling maze by connecting them with a lift system. “I did want the game to feel tense from the outset. You are in hostile territory and on a mission. In retrospect, I would have done this in other ways rather than just time pressure. I imagined if I was on a mission like this I would come across a variety of tasks. I liked having the variation to help break up the action, and these types of puzzles were a low cost in memory.”

The combination of time-sensitive puzzles with intense firefights left Trantor on the difficult side, which, in hindsight, Nick regrets. “If I had more resources to make the exploration more interesting I would have eased the difficulty down. As the game felt ‘light’ in that area we focused on keeping the action up, but I didn’t mean it to be quite so difficult.”

As well as balancing Trantor’s gameplay, Nick also found himself working on an Amstrad version of his unfinished Spectrum title with a star coder who had just gone freelance. “There was an overlap,” Nick explains, “but David Perry coded so fast he finished at the same time as the Spectrum. The game itself was largely set in place by the time he was on it. I’m sure if he had started at the beginning we would have had a few more features in.”

Although he recalls coding the Amstrad Trantor faster than Nick does, David Perry cites the artist’s graphics as his reason for taking on the conversion. “I resigned from Mikro-Gen and Fergus McGovern asked me to visit him at Probe. He ended up offering me a conversion project called ‘Trantor: The Last Stormtrooper.’ I took it as I was amazed by the artwork. I had made a flexible engine, so I caught up with the programmer on Spectrum and ended up finishing the game on Amstrad first.”

The graphics Nick created for the Amstrad version did cause David a few headaches, but the coder remembers relishing the challenge and working with his artist colleague to produce stunning visual effects. “It was coded from scratch on the Amstrad, and the biggest challenge was the enormous character! It was unusual to go so graphically heavy with the game, but I loved the challenge. I was one of those people that appreciated talent. When you do that you get the best out of people. Nick was no exception. He’d tell me what he needed and I’d make it happen.”

But despite the Amstrad Trantor’s colourful graphics, Nick Bruty isn’t certain that it’s the definitive version. “In terms of features, yes, but I always struggled with the Amstrad’s double-pixel mode. The colours helped compensate, but I preferred the Spectrum’s resolution. What really surprised me was how fast David Perry’s Amstrad version ran. Typically conversions were slower on the Amstrad, but it was slightly faster allowing the action to feel more fluid.”

Trantor received sparkling reviews at the time, but Nick notes that his game’s fortunes didn’t reflect its critical acclaim. “I was very happy with the response. It was a great first experience for me. The commercial success is disputed, though. I have never seen final sales figures.”

Slightly less successful conversions followed, which Nick has only now looked over. “The C64 looks to be the smoothest, although the palette is muted so it lacks some visual punch. The MSX version reminds me of the Amstrad with its colour and resolution although its frame-rate is lower. The Atari ST port is a disappointment. Technically it seems fine, but the art is terrible. As for the DOS one, my eyes are bleeding with that terrible four-colour mode!”

Ports aside, the original Trantor teased a sequel, but Nick reveals that his ideas for Trantor II were never acted on. “Sadly no work was ever started. If we had switched to the Amiga / ST then I would have tried a co-op version. I liked the idea of players having to cover each other. For this to work I would have had to pull the camera out further. David Perry and I worked as a team for many years after Trantor, so the sequel would have been made by bot of us.”

When asked if he would change Trantor, Nick offers a number of tweaks, but his final words express pleasure at how well his game is still thought of. “I would make the action more directional, not just horizontal. I would allow you to clear out areas and change the way the time pressure works. I’m delighted how well it’s thought of – it makes me want to go back and revisit the genre!”