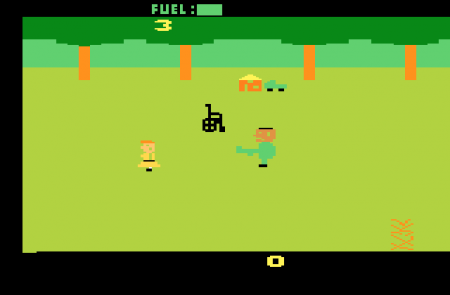 The Texas Chainsaw Massacre for the Atari 2600 was by all means a terrible game however is unique in more ways than one.  Firstly you play as Leather face, not as one of the victims, your job is to run round a field and cut up teenage girls. Well this thought alone was enough to put shop keepers off from selling the game, the shops that did sell it kept it behind counters and you would have to ask for it. The Graphics and sound are terrible, and I know Atari had very primitive graphics and sound but this game was really bad. Your only goal for the whole game is to hunt down and kill teenagers, nothing else.

So although this game was a big failure, today it is extreamly rare and deserves a few lines.