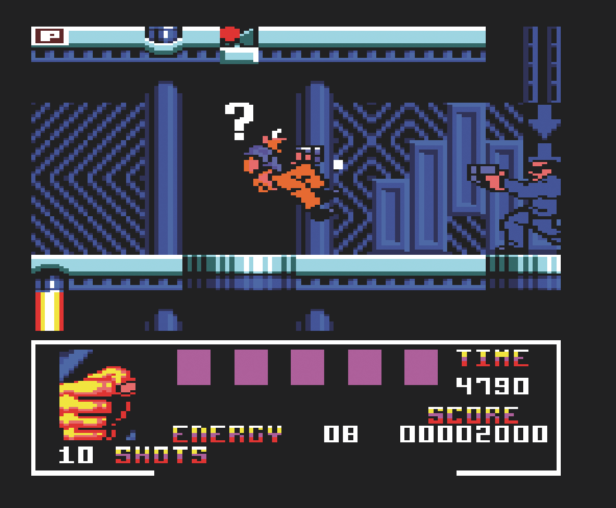 Total Recall was a total nightmare. Not for the player –  it turned out to be one of Ocean’s finest movie tie-ups – but for the programmers. A Manchester-based developer called Active Minds had been employed by Ocean to produce the game for all formats, but it was making a real hash of it.

Simon Butler was taken on by Active Minds shortly after the project had started and he was astonished at the poor progress that had been made. The graphics were poor and there no resemblance of a game, yet Ocean had pinned its hopes on it being a bestseller. When the lead artist left Active Minds, Butler brought in Mark Jones to help, but things didn’t get any better.

Although Jones was producing maps and graphics for the game, the programmers only mustered up a scrolling screen and, a couple of weeks later, an animated Arnie effectively running on the spot. Weeks passed, the same bulked-up hero could be seen moving his tiny feet against the same backdrop.

Ocean got wind of this late in the day and it ordered the game be taken in-house. Butler and Jones were moved into the main Ocean offices and asked to sort the game out in just two weeks. The effect was that the game was so late coming out that it was tied in with the release of the video rather than the cinema launch.

And yet when you look at the result and consider the strife, it was a major triumph. The graphics were gloriously chunky and beautiful – a far cry from what was originally intended right at the start – and while the gameplay could be argued to be a rather tired and typical Ocean platformer, albeit with driving sections and colour-coded puzzles, it retained a charm that ensured it went down a storm, critically acclaimed by many a reviewer. And it was damn hard.

There was even time in that development window for a lush loading screen and spot-on sound, neatly papering over all of the cracks that could well have cost Ocean millions and severely damaged its reputation. Those who worked on the successful version would no doubt have welcomed a memory replacement to erase the thoughts of what could have been. But they would never want to forget the final cut.