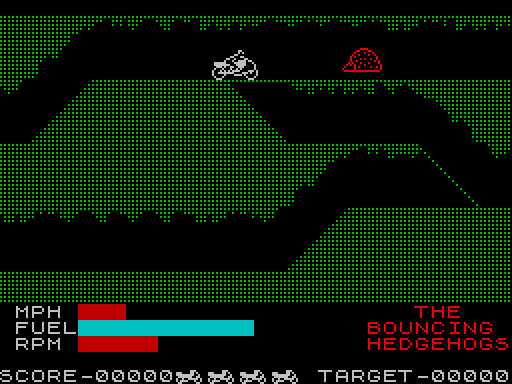 After playing Wheelie for a bit, I can’t help but think that I’ve gone a bit soft over the years. It’s an unusual platform game, in that it’s set on a motorbike and handles as such. If you want to go up a slope, you’ll need to ensure that you have enough momentum to do so, a routine that will surely be familiar to the millions of Sonic fans out there. But while in other games crossing an icy patch just means you’ll slide around for a bit, in Wheelie you’ll lose control and crash. Speed must also be regulated in order to descend slopes and cross gaps. Despite the fact that I grew up playing platform games, Wheelie is the kind of game that causes me to fail at apparently easy tasks.

Wheelie’s not a bad game at all, but the most memorable bit of it for me is arguably the worst part on a personal level. As you might have guessed from the reference above, my years of experience with platform games include a lot of time spent commanding a hedgehog to jump on enemies. In Wheelie, the first stage is spent trying to avoid having hedgehogs jump on you, which for most players is a relatively cutesy set of obstacles to overcome. But for me, being squashed by a hedgehog is a surreal, nightmarish inversion of the natural laws of videogaming. So that’s Wheelie: a game that I like, but one that has instilled fear and respect into me.