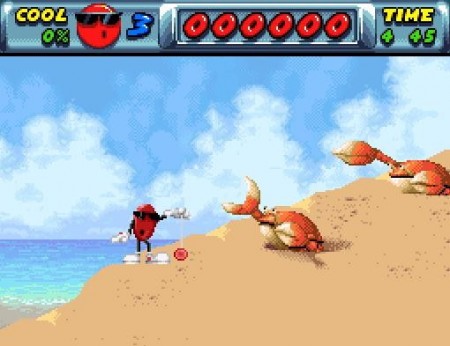 Product placement in the media has become a regular thing now in current society. Various games regularly advertise products somewhere whether it be through cut scenes or gameplay. Yet in 1994 Virgin Interactive created a game where it was entirely circulated around a mascot and product. That game was Cool Spot.

Cool Spot is a cult platformer for the SNES and Mega-Drive where the player takes on the role of Cool Spot. Based on the mascot of the 7-Up soft drinks franchise it is you're job to collect "Spots" to then be able to set free the other "Cool Spots" to advance to the next level. Along the way, the player can collect 7-Ups which act as extra lives again placing product placement all over the game.

Now as with a game like this you may be thinking this game isn't too good and to be fair I thought this too. However surprisingly Cool Spot is a fun and cool game. It has great fluid animations on Spot, great music, controls and graphics. It is a shock to say the least. Also the game is a challenge and because the game has no save feature and only level-check points, you need to be careful when playing.

To conclude, Cool Spot is the "black sheep" of product placement games. It is fun, it is challenging and it is cool. It was released for a variety of different systems at the time including both the SNES and Mega-Drive. I own the SNES version and it is great. However no matter what system you get it for or own it on it is a cult classic you need in you're collections.

So, a 7-Up game, you say? Anyone living in the UK at the time would've expected something to do with Fido Dido. He'd walk forward a bit and then probably get into his hammock and have a drink. That game wouldn't arrive for another couple of years. What we got instead was another masterpiece from the Dave Perry/Tommy Tallarico duo who blessed us with Aladdin and Global Gladiators, and who would soon be dropping Earthworm Jim on us all.

The game they bestowed 'pon us? Cool Spot! As in, a spot that is cool. Not the pus-filled, face-riddling kind, but the big red 7-Up kind. And yeah, he's cool. Wearing sunglasses, y'see, and he struts a lot. Crabs? Cool Spot don't need no cream, he flicks bubbles at them! Spiders? Mice? Wasps? Boglins? No problem, just give'm some bubbles. That's how cool Mr. Spot is.

Coolness aside, we're still left with a spectacular platform adventure thing. There's a certain elasticity to the way the guy moves around, jumping and stuff, reading the newspaper inbetween levels and snapping his fingers or playing with his yo-yo if he's not doing anything else.

No idea what the plot is. There's no bosses or anything, so it must've been those crabs that locked up eleven clones of Cool Spot in those check-board cages. Or maybe it's a psychological cleansing for Spot? Like, he's locked away every aspect of his personality besides his "coolness", leaving him unable to laugh, unable to love, unable to live.

Nah, probably just an excuse for all the bouncy-bouncy platform shenanigans. In 1993 you didn't need a plot to sell your platform game, you just needed it to play well. This one does that, and it has a wicked-cool bonus level set inside a giant bottle of 7-Up.

Special mention once more goes to Tommy Tallarico for making the best music of any game ever in this one right here. There's Toxitown Blues, which is re-used from Global Gladiators, and there's the generic surf music on the title screen, but besides that there's an interpretation of the Magnificent Seven's theme, some funky house, a bit of crazy carnival music, and the slap-bass screamy shenanigans of the Off The Wall theme, which remains my favourite piece of gaming music to this day. Even got it as my ring tone, oh yeah.

Above all, Cool Spot helped to spread an important message to the kids of the Nineties: Drink Coke and you'll get spots. Drink 7-Up and you'll get cool spots!