I consider Fallout to be one of the best rpgs ever made. Let me explain to you. The story is awesome! You are the chosen one set off to find the Holy G.E.C.K. (

On your quest to find the G.E.C.K. you fight mutant geckos, mutants bandits, mobsters, deathclaws, and basically anything you can think that was in a post-apocalyptic movie or book. Think of this as Mad Max meets A Boy and his Dog. Now I have even gotten to the characters, weapons, or setting. The cool part about Fallout 2 is it set in . So you can go to San Francio. Now the Characters. There are a lot of people to talk to in Fallout 2 but the best part is some people can even join you on your quest. Talking robot dog? Check. Mutant? Check. Robot? Check. Crazy Guy who thinks he is possessed because he has a bone from a stranger? Check.

The best are the weapons Lasers, Uzis, everything’s here.

So as you can see Fallout 2 has everything is simply. THE BEST! 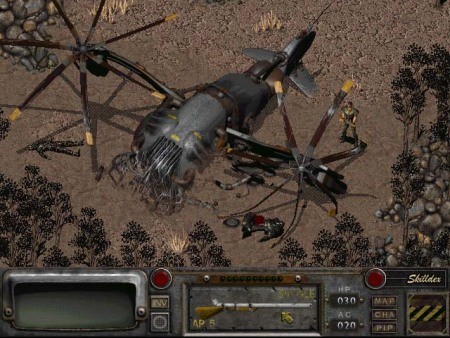 Sequels are notorious things within the realms of film and video games; they often suffer from a lack of development or a move so far away from the original concept it alienates fans of the developing series. Even with this in mind, I feel that Fallout 2 managed to dodge this completely, providing a perfect continuation and development of a world, which only benefited from an increase in canon. I failed an English Literature exam in secondary school for this game, and I still don’t regret it. Fallout 2 took what universe was crafted in the first game and ran with it.

Using the isometric viewpoint again, you play as ‘The Chosen One’, a descendant of the Vault Dweller. You live a simple life in a northern tribe, but a terrible drought settles upon the village and crops and children fall sick or die. You are asked to find a Garden of Eden Creation Kit (GECK) for Arroyo. The GECK is pre-war device that can create thriving communities out of the post-apocalyptic wasteland. With such an important charge, you leave your village, and once again find greater responsibility heaped upon you.

Fallout 2 has a plethora of things to discover, including an entirely new world to explore. It’s the plot that will keep you coming back for more, but if you’re a fan of turn-based combat, I’ve not come across better in my days of gaming. It works on a hex system and action points, leaving the player to discover and devise tactics.

Once again, a game that can be digitally delivered for a few quid with support is incredible for what you’re getting. If you loved Fallout, this sequel just keeps giving more of what you want; the dark humour, the cultural references and a complicated world. There is no reason for any RPG fan not to have played this game.