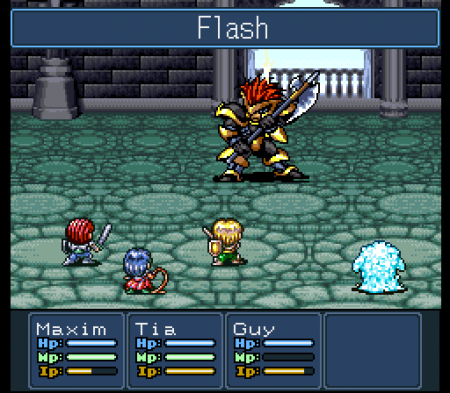 Lufia II: Rise of the Sinistrals, known as Estpolis Denki II, officially translated Biography of Estpolis II in Japan, and as simply Lufia in Europe and Australia, is an RPG game with puzzle elements developed by Neverland and published in Japan in 1995 by Taito, and in North America and Europe in 1996 by Natsume and Nintendo respectively, for the SNES

The game is a prequel to Lufia and the Fortress of Doom. It follows the story of the first main character’s ancestor, Maxim, and explains the origins of the war between mankind and a group of superhumans called the Sinistrals. Lufia II made a number of changes from the first game. Dungeons no longer have random encounters and there are hundreds of puzzles throughout the game, ranging from simple to extremely challenging. It also introduced new skills, such as a variety of weapons that could be used to stun monsters or solve puzzles, and IP attacks.

In Lufia II, characters walk around an overworld map, enter dungeons, fight monsters, buy or find new equipment and spells, and set out on a quest to save the world. The player’s party will support up to four characters at once, along with a Capsule Monster. There are various forms of transportation which the player may utilize in order to travel faster than walking, these include; warping, a spell learnt early in the game; a boat, modified by Lexis into a submarine and later a blimp. Various casino games are accessible later in the game; these include Pachinco Slot, Black Jack, Slot Machine, Stud Poker, and Action Bingo.