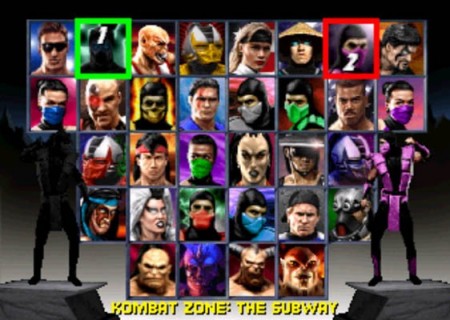 I can still remember the old adverts for when the original was released onto consoles and I was suitably excited.  I had never experienced it in the arcade but all the hype and the digitised graphics and the blood…. so much blood!!!…. Unfortunately I only owned a Master System so my first experience wasn't as polished as many… I still loved it though… there's just something about pulling off one of those perfect uppercuts… EXCELLENT !

Anyway… I really wanted to review a game from the series and this is probably the one I've played the most.. and the only one no one else has done!… SO…

Just look at that cast of misfit, mythical, evil characters… there's 36 to choose from in this game, which is ALL of them from the first 3 classic games.  You gotta love that for a start.  Yes so, as people say, they 'technically' don't have their own fighting styles, but it's all about the special moves, of which they all have at least three… and they 'feel' as if they are individuals.  All the back drops are there and look great, there's also an extra 'agressor' feature which gives you more strength when you've been blocking a lot, I think.. never really understood it fully, nor saw the point in it.  All the fatalities are here too… and that's something all MK fans love… two proper ones each character, plus animalities, the pointless babilities, the amusing 'friendships' and a new thing called 'brutality' which has you pummeling the opponent in quick motion till they explode!  Personally I go to options and press up on the pad and all four top buttons which unlocks the secret menu enabling you to choose 'one button fatalities'.. cheating?  Yep.  I always found the fatalities too hard to pull off.  There's other unlockables too of course.

I have been known as a 'dark' kinda guy.. a goth I guess… and the drakness in Mortal Kombat appeals to me.  I also like the humour (lets face it.. the gore isn't real… it's funny).. and the fast action gameplay.  I've never been a beat em up fan to be honest but Mortal Kombat is easier to pick up than most, which is why a lot of people diss it, but that's exactly why I like it so much.  It's all here in this one game, and I'd say this is the best version of 2D Mortal Kombat.  The only thing that lets it down is the loading times.  I wanna fight, fight fight and occasionally you have to wait a bit… grrrr…. oh yer, and its impossible.  That is to say, play it on 'easy' and you'll get to the boss Shao Kahn eventually but it may take hours to beat him and by that time you may have thrown several controllers out the window…. still, you could always play it on two player!