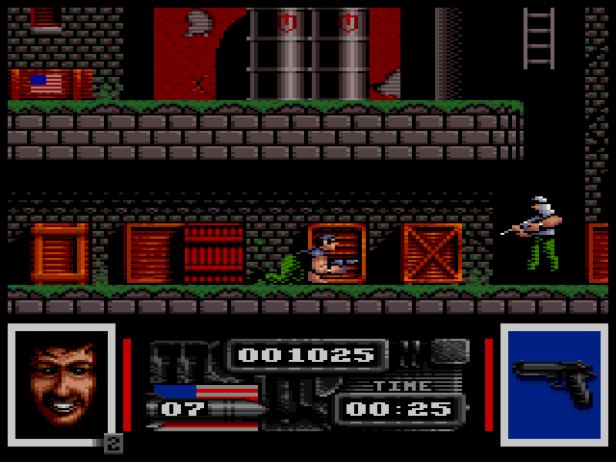 The Amstrad GX4000 wasn’t blessed with a huge number of good games (or games of any quality, really), but Navy Seals is one of that tiny minority. Just have a look at it – while you can’t see the reasonable animation, the detail on sprites and backgrounds is surprisingly high thanks to the massive colour palette of the GX4000 hardware. In action, it’s one of the more attractive games ever to be released on an 8-bit console.

However, Navy Seals is more than just a good looking game – it’s also one of the harshest taskmasters you’ll come across. Unlike the vast majority of run-and-gun games in which enemies are dumb and you are superhuman, Navy Seals features enemies who shoot on sight, not to mention player characters with shockingly realistic jumping abilities and a fatal weakness to bullets. Without the agility to escape dangerous situations, you’ll need to fall back on a stealthy approach – creeping up on enemies from behind or below is infinitely preferable to running in with guns blazing, but even then you’ll need to be very precise in timing your movements. Make no mistake about it – it’s very possible that the first time you play, you’ll waste all five of your lives on the opening screen.

The excessive difficulty is a shame, because it renders an otherwise perfect showcase game for the hardware somewhat off-putting. Still, if you’re a GX4000 owner looking to see exactly what could be done with the console’s frequently underutilised hardware, Navy Seals should do nicely.