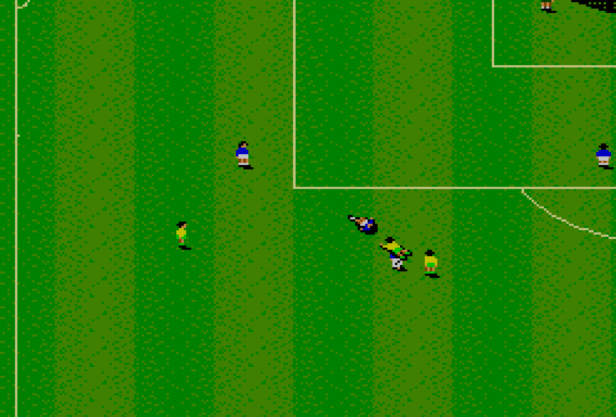 As a Master System owner in 1993, I came to understand that while I could have some of the same big name games that my dad could get on the Mega Drive, there would inevitably be compromises to deal with when they came to my console. Mortal Kombat only had two backgrounds and you couldn’t play as Kano, while Streets Of Rage had its multiplayer support omitted. Even miraculous efforts like the brilliant conversion of Desert Strike suffered a little because of the system’s two button control pad. Then there was Sensible Soccer, the Amiga classic ported by Eurocom. If I hadn’t known any better, I could have been convinced that it was designed specifically for the 8-bit machine. The small sprites were a stylistic choice of the original, but allowed for the speed of the gameplay to come across intact, without any irritating flickering. Because the game was designed for the Amiga, another system with limited buttons, the control scheme just happened to be perfect for the pad already.

Of course, there were still some concessions to be made. The sound was naturally limited to a simple white noise crowd roar, with none of the sampled sounds of the 16-bit versions. Instant replays were out too, likely because of the memory overhead needed for such a feature. These omissions didn’t really feel particularly consequential though – Sensible Soccer felt much closer to its original version than many Master System conversions of the time. What’s more, Sensible Soccer was of Premiership pedigree compared to the Sunday League efforts that were the Master System’s previous football games, like the slow and awkward World Soccer or the hopelessly broken Champions Of Europe,. The irony of it all is that those games had been designed for Sega’s console from the ground up, but Sensible Software had created a game that fit Sega’s venerable hardware better than any of them, without having ever intended to.