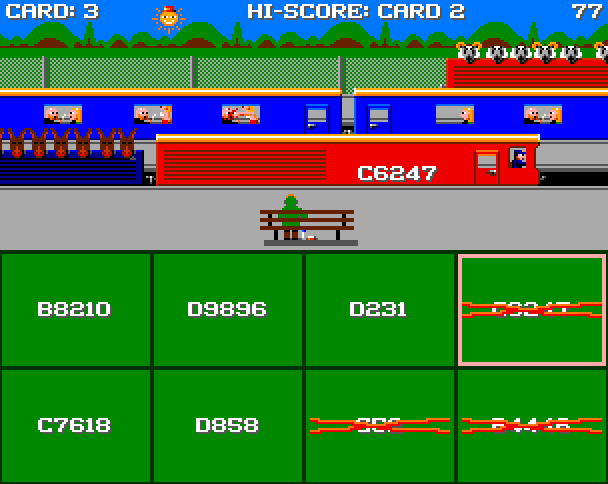 Recently, I was watching some old episodes of GamesMaster on Twitch, and one of the celebrity challenges involved Armadillo Racing. If you’ve not heard of it, it’s an odd Namco arcade game with trackball controls. It generated a bit of discussion, with the observation that the days of “being able to make a game of anything” didn’t end in the Eighties. Of course they didn’t – the game Shower With Your Dad Simulator 2015 exists, as I pointed out to the horror of fellow viewers. At that point the original commenter brought up Sensible Train-Spotting, the final Amiga game by Sensible Software.

Sensible Train-Spotting is a game about the highly regarded pastime of recording trains that travel through a station. If you feel like adding extra authenticity, you could imitate the game’s main character – just sit on a bench while wearing an anorak, and occasionally take a sip from your flask of weak lemon drink. Conceptually, it perhaps lacks the wide appeal of Sensible Soccer, Cannon Fodder or even Sensible Golf, but it does go to show that you really can make a game out of anything. Because you receive time penalties if a train isn’t on screen at the time you try to record its appearance, filling your cards becomes quite a tricky task when the numbers get longer and the trains become more frequent and start to obscure one another. It’s compelling, right up to the point that you remember that you are engaging in simulated anorak usage.

Unsurprisingly, Sensible Software didn’t try to turn this into a commercial product, instead releasing it on an Amiga Power cover disk – and that’s where these sorts of concepts tend to be realised. You’re never going to see a Call Of Duty or Assassin’s Creed budget allocated to a game about mowing the lawn, but there are plenty of oddities to be found whether you’re looking at cover disk jokes, bizarre budget PS2 games or today’s quirky indie favourites. Now if you’ll excuse us, we’re off to play An Airport For Aliens Currently Run By Dogs. Yes, of course it actually exists.