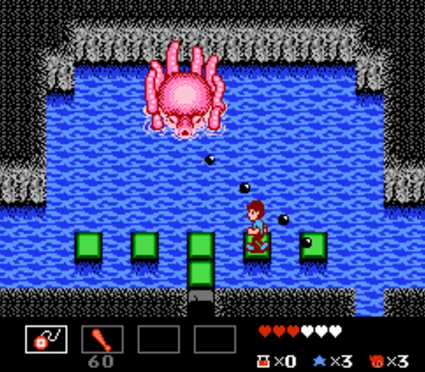 StarTropics is by far the most under-appreciated forgotten gem on the NES. Made exclusively for the Western markets, StarTropics has you taking on the role of Mike Jones who goes to visit his uncle Dr. Jones (the archaeologist) on C-Island. But when you arrive, he is missing and it is up to Mike to find him.

StarTropics may follow the now traditional platforming/action adventure narrative but it is by far one of the most entertaining video-game narratives ever. The game takes place in chapters with each chapter being a different level in the game leading you slowly but surely to Dr. Jones. The game gives you a variety of clues to help you in finding Dr. Jones adding a dimention of puzzle gaming to the overall experience.

Gameplay-wise the game plays very much like a hybrid of The Legend of Zelda and Final Fantasy. The exploration elements are in equal weight to the action elements which all take place in a top-down perspetive. Much like many adventure games, the game contains a variety of power-ups and additional weapons to help guide you on your quest to find Dr. Jones. From Yo-yo's to Baseball bats to Mirrors every power-up is used uniquely in the game and with each new power-up a new element of variety is created.

Much like The Legend of Zelda, the game awards you with additional hearts for beating certain bosses (as well as finding them when exploring the islands overworlds). The game has some brilliant puzzle elements really challenging you to think carefully about how to navigate past certain enemies or advance to the next chapter of the game. The game also contains a save-feature which is much needed due to the size and length of this game and it really does make this game feel much more impressive than most NES games due to this addition. The difficulty of the game is just right as well where-by it gradually gets more difficult as the game goes on but never makes you feel frustrated to the point of tears like most games; persistance is the key to being successful in StarTropics and once you complete a level it feels such an achievement yet exciting because you can't wait for what comes next.

But for me what makes StarTropics so fun to play is the presentation. The music, graphics and level designs are all brilliant and so engrossing that they just suck you into the world and make the same so addicting to play. The game along with the great narrative also has some brilliant cut-scenes which really add to the polished and professional look of the game, making it feel almost like an interactive movie.

To conclude, StarTropics is the forgotten Jewel in the Crown of the NES library. Named by IGN "the natural evolution of The Legend of Zelda" it is brilliant compedium of everything great in video-games. Truly ahead of its time StarTropics took the NES to the limits of its hardware capabilities and in the process created a masterpiece. While the game is highly rare in it's original cartridge form it is available for download on the Wii's Virtual Console at a cost of 500 Wii points, meaning it can be played and remembered once more as one of the video-game industry's most complete and enduring experiences.