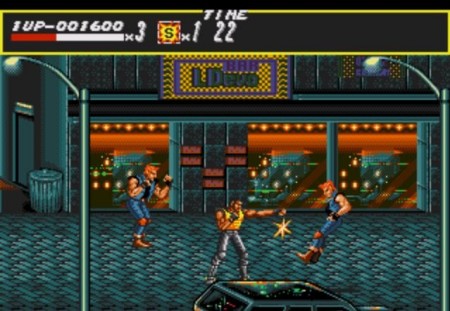 Developer: In House AM7

Right I know this is cheating doing a review on SOR when it has already been done… But on the Mega CD?! WHOOPAH!

Being the avid gamer that I am, I never actually ever played on a Mega CD (they were so expensive and I was more of a Nintendo boy before they sold their soul for a sherbert dip and a packet of discos) before this week. My girlfriend who has no interest in games has a Sega CDII in her loft. Awesome! Now I was going to do some other reviews like Road Avenger (awesome game) but most games she has are already done by you folks. But the girl does have a fixation on SOR so for the second time in a month (played it on 360 with her as well) I got to nail it again.

Still a quality game – but I have been spoilt by SOR2. Graphically superior, more moves and if anyone whos played the second then gone back to the original and pressed the A button will also know the rage and suffering it causes doing so.

Anyway SOR err CD 'sorKed' then if you will is exactly the same game. Apart from Sega compiling it with Golden Axe, Columns, Shinobi and Monaco GP on one disc.

It does have one difference though. They have re-recorded the characters voices throughout the game with real voice overs. Gone are the days chuckling away when Axel shrieks "QUEEERRR" as he jump kicks a dude in the face, they have all been replaced and they all suck something fierce. Every bad guy has the exact same death noise. A game I have played a million times just didn't sit right with me for the first time. But then I smacked my girlfriend with a metal pipe and it made everything seem right again. Mostly. When talking about the Streets of Rage series for the Megadrive, the first of the three appears to be one of the most overlooked games the console ever had.  This was the first game I bought for Sega's 16 bit machine, and still remains a firm favourite of mine today.

The plot is a fairly simple one, a criminal organization is running riot and destroying the city, and three police officers decide to take on the gang themselves.

You play as either Blaze, Axel or Adam and have to clear multiple stages of punks, ninjas and women dressed in bondage gear.  The usual power ups can be found along the way, health, special attacks etc.  Plus weapons such as bottles, baseball bats and knifes can be picked up and used on opponents.  Special attacks are limited to one per life, and when activated, a police car following behind will arrive and fire rockets and grenades, wounding and killing on screen enemies.  And, as is is the norm, end of level guardians appear and must be dealt with before a stage can be completed.

The final stage has you fighting your way to the office of the machine gun wielding boss, but before fighting him and saving the day, you are offered the chance to join the gang and work along side the man you've fought your way to, which is a nice touch.

Not as remembered or as popular its sequel, Streets of Rage remains a Megadrive classic.