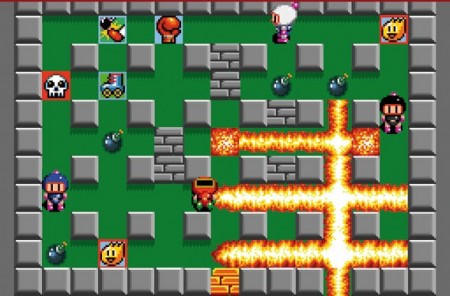 It can safely be said that people rarely play Bomberman for its single-player experience. Despite the odd exception – Saturn Bomberman’s RPG-esque adventure immediately springs to mind – ploughing through Bomberman on your own is a soulless experience and about as exciting as filling out a tax form.

So why then has Bomberman managed to survive cockroach-like over the years (it’s now 24-years-old) when other franchises, which are more enjoyable to play, have withered and died by the wayside like a bouquet of week-old flowers that someone forgot to water? Simple. It just so happens to be blessed with one of the greatest multi-player experiences this side of the Saturn’s excellent Death Tank (Google it, if you don’t know what I’m talking about).

Taking place in a confined arena, the idea behind Bomberman’s ‘battle mode’ has always been simplicity itself: lay bombs and blow up your opponent until you’re the last (Bomber) man standing. Initially starting off in separate corners of the screen you’d quickly start blowing up walls, which would hopefully yield an extra bomb or other useful power-up for you to totally humiliate your opponents with. As the playing area decreased in size and the length of each bomb’s explosion grew, it soon became a frantic game of cat and mouse that saw you trying to avoid the trails of explosions whilst trying to trick an enemy into making a fatal error before you yourself faltered. Once you were able to stun an enemy with a well-kicked bomb, or better yet, use that well-kicked bomb to trap your hapless foe into a corner the feeling of elation was quite possibly unmatched by any other game. Even the firmest of friends could become instant enemies after a brief spell in Battle Mode, and with more new versions on the way, those rivalries could no doubt extend for another quarter of a decade.