It was on a late, cool November night that I began my journey through Terranigma. Black Friday, in fact. Somewhere miles and miles away my crazy cousins were plotting their great raid. Me on the other hand I was gearing to unravel the marvelous world that is Terranigma. Over the next two weeks the game consumed me. Whether I was searching for the Five Sandstones, deciding whether to vote for Jean or Louis, or just simply looking out for poor old bloke Bell in Freedom, Terranigma grabbed a hold of me from the very start, and didn't let go until the very bittersweet end. Expanding the various towns is very neat, and tasks such as passing out nine letters for the cause of Nirlake all adds to the game's greatness. Plenty of NPC interaction and slaying – this is an action RPG if I ever saw one!

The game is on the easy side… it hardly gave me any trouble at all. But when a video game is as enjoyable and sweeping as Terranigma, you hardly care. You're too busy having a good time. The soundtrack is amazing. Admittedly, Terranigma did not win me over 150% immediately. It slowly but surely crept up on me, and before I knew it, Ark's quest had totally consumed me. It's a global adventure. Along the way you'll see many varied sights, and meet folks from all walks of life. Towns expand, things pass and fade away, love blossoms, evil reigns, hope abounds. Some of the puzzles were a bit tricky, but the solutions were always right under my nose. The final boss is way too easy and a bit anticlimatic as a result, but the emotional ending left me both satisfied and saddened. Simply put, Terranigma is a special game worthy of its hype.

If you haven't played it yet, what are you waiting for?  Find a way. Whatever you do, just play it. It's one of the best games ever created for the Super Nintendo. Yes, some folks *gasp* do find it overrated and overhyped, but if you're in the camp of those who love it, like me, you won't ever forget it. It's the kind of moving adventure that all too rarely one gets to experience in a gaming lifetime. Thank you Quintet – I can't think of a better SNES swan song for you guys than this. Terranigma is well deserving of its spot on the pantheon of Super Nintendo's very best. Bravo, Quintet, bravo! 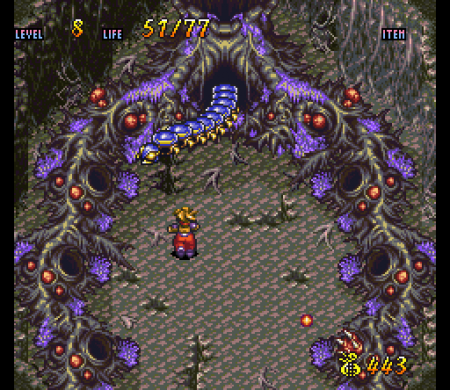 If you're looking for an epic game on SNES than look no further than Terranigma. Released in 1995 by Enix in Japan, it tells a story of earth's resurrection and evolution in the hands of a boy named Ark. European version was released in 1996.


As I said, the story follows Ark, a boy from the underworld village of Crysta who embarks on a quest to resurrect and restore the destroyed Earth and evolve all life on the surface. While on his quest, Ark will meet with some of the most important people in the history of Earth and learn what caused the the destruction of planet.

Gameplay wise, Terranigma is an Action RPG. Ark uses spear, the first weapon man has wielded, to attack his foes. At the same time he is able to run and jump, and combining those moves with attacking he is able to create a lot of powerful combos. While fighting, Ark gains experience and levels up, just like in a standard RPG. When you're not fighting monsters, you'll be exploring and evolving towns across the world map, witch serves as a really nice mini game.


Visually, Terranigma is gorgeous. The sprites are big, detailed and beautifully animated. Music is excellent and there are a lot of tracks that I occasionally listens to. Story is amazingly well written and will keep you tied to the game with it's plot twists.


All in all, this is an excellent and most of all, EPIC game and it should not be missed by anyone, not just fans of the RPG genre.