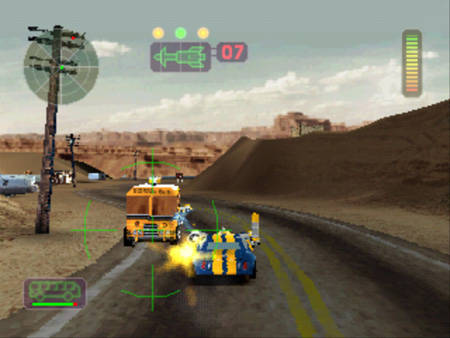 Released during the peak of the N64 life, Vigilante 8 was the multi-console answer to the highly popular Twisted Metal series. It was basically the same premise of automotive destruction that proved to be so addictive. It really was quite a different game, on the N64, when it came to its tone. The atmosphere was overtly bleak and gritty. It now seems to carry the pervading feel similar to a cult following. Maybe that’s just me.

The single-player mode has you choose from 12 different vehicles, which you use to complete various missions. Some of these include, destroying enemy vehicles, protecting a bank, and destroying gas stations. The multiplayer is where the game really shines, however. The modes of play consist of death matches to coop survival against a ruthless computer team. The varied weapons add to the chaos. When you start out, you always have a weak machine-gun, but in order to inflict real damage you must drive around the maps in search of mine dispensers, rocket launchers, missile launchers, an offensive lightening rod, and many more. In addition to weapons, you can also search for power ups that increase health, provide shielding and increase weapon accuracy.

The graphics are decent, considering the amount of objects shown at any given time. The frame-rate suffers noticeably at times, but usually only occurs when the resolution is put to the high setting. The game does support the 4mb RAM expansion, so that the resolution can be set to ultra high. The soundtrack is a strong point, with catchy tunes and suitable, yet slightly repetitive sound effects.

Bottom Line: A mindlessly fun automotive shoot-em-up that will grab you with the multiplayer and never let go.