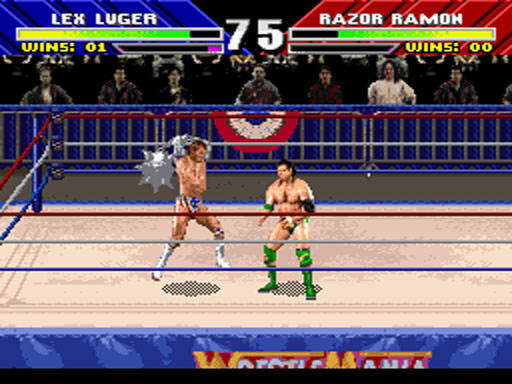 WrestleMania: The Arcade Game for the Mega Drive has the rare distinction of being a better arcade port than the SNES version of the same game. Developed by Midway (who also brought us a better version of Mortal Kombat on the Mega Drive), WrestleMania is very overlooked as a solid and fun beat-em-up.

Released in 1995 when wrestling was going a little downhill with it’s cartoony characters, WrestleMania was released during a bad financial year for the WWF. The roster confirms this, with wrestlers such as Doink the Clown and the abysmal Lex Luger making an appearance.

The Mega Drive version retained the entire cast from the arcade game, whereas the SNES left out 2 characters (Bam Bam Bigelow and Yokozuna). This one was a victory for the Mega Drive. It’s such a shame not many other people played it. Playstation 1 was released the same year, so WrestleMania can be considered a very late entry to the Mega Drive library.

The game does not play like you would first expect from a wrestling game. This game is actually closer to Mortal Kombat or Killer Instinct with it’s over-the-top moves and insane combos. Wrestlers have been digitized and look very good on the 16-bit machine (even better than the characters in the Mega Drive Mortal Kombat port). You can perform wrestling moves in the game… although you may prefer whacking your opponent over the head with Shawn Michael’s baseball bat, electrocuting your opponent with Doink’s hand buzzer, or shooting spirits and ghouls at your opponent using the Undertaker!

There is absolutely nothing “real” about WWF WrestleMania : The Arcade Game. This game is as frantic and insane as you can imagine. Arms turning into razors (for Razor Ramon), Bam Bam Bigelow burning a hole in the ring mat aftrer his flying headbutt… this game is mental. And in a good way!

Matches are based on 2 out of 3 falls, and a fall will end when your opponent’s health is totally depleted. You can fill up a super-combo bar to unleash a 10, 15 or 20 hit combo (dial-a-combo unfortunately, quite like Mortal Kombat 3). There are no restrictions on the moves you can apply. If you want to nail your opponent with Undertaker’s tombstone finisher as soon as the bell rings.. you are welcome to! Just watch out, you may get smacked with a huge baseball bat or get salt thrown in your eyes!

Game modes are lacking though. You can compete for the IC or WWF belts by defeating opponent after opponent. Later stages will consist of handicap matches where you must face 2 or 3 guys at the same time. Multiplayer is where the game shines (if you have an opponent who knows the right button combinations for the special moves) and there is plenty of fun to be had with friends.

Ports are available for the SNES, Mega Drive, Sega Saturn, DOS, PS1 and 32X. There really is no reason not to even try a few matches. I am pretty sure you will be pleasantly surprised. Beat-em-up fans should hunt this one down.