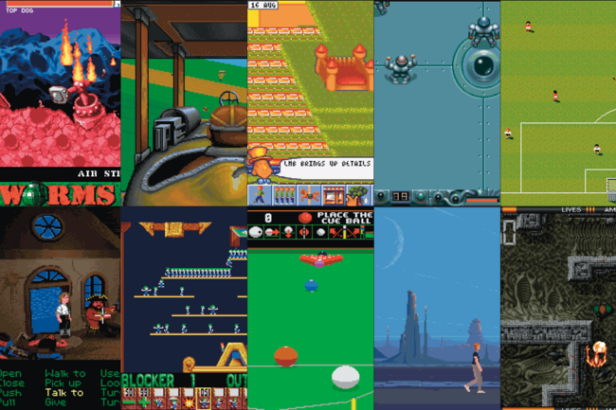 For many, the Amiga 500 remains one of the best gaming machines of all time. It has a staggering arraay of games that cover all sorts of different genres, some cracking arcade conversions and a number of exclusive, groundbreaking games. It’s certainly been tough coming up with 10 games that define the machine, but we think we’ve done a pretty good job with the following. Don’t agree with us? Let us know in the comments section. Worms
Released: 1995
You’d have thought that by 1995, ten years after the Amiga 1000’s launch, it had seen every one of its defining games already. Well, Andy Davidson and Yorkshire-based Team 17 obviously thought there was room for one more and the world agreed with them. Worms was an absolute sensation and went on to sell millions of copies across countless formats, sequels and spin-offs. It’s important to remember that the multiplayer strategy game began life on the Amiga, however, and was mostly a five year labour of love of just one man and a copy of Blitz Basic. And that was what was really great about the Amiga: it turned bedroom programmers into millionaires and created memorable franchises that endure for a lifetime. Can the same be said of the Xbox? We think not. Jimmy White’s Whirlwind Snooker
Released: 1991
It may have been written by Retro Gamer’s ex-columnist, Archer Maclean, but there’s no favouritism here. Jimmy White’s Whirlwind Snooker deserves to be in the Perfect Ten because it was the first game to really make snooker work on a home computer and remains a damn good sports title to this day. The 3D graphics and accurate real-time physics on each of the balls made Whirlwind Snooker a landmark game that pushed the hardware further than most gamers thought possible. It’s arguable that the game has never been bettered, if not in its gameplay and graphics then definitely in its humour. Who can forget the cheeky faces the balls would pull if you didn’t take a shot? Another World
Released: 1991
Defender Of The Crown and Shadow Of The Beast may be the two games that wowed consumers enough to buy an Amiga but they were both severely lacking in the gameplay department. Another World, on the other hand, had both incredible graphics and utterly gripping gameplay to match. Essentially an evolution of the Prince Of Persia style of game, Another World swapped sword fighting for laser guns and added a bunch of fiendishly tricky action puzzles. The game looked stunning too; the use of vector graphics was a stroke of genius that ensured that Another World looked light years ahead of any other game of the time. Erik recently returned to the limelight in 2011 when he released the God sim From Dust. Lemmings
Released: 1991
What can be said about Lemmings that hasn’t been said before? It’s appeared on nearly every format known to man and is surely as much a household name as Tetris and Space Invaders. Sequels and updates continue to appear to this day and the little suicidal rodents show no sign of losing their popularity. Back in 1991, however, the release of Lemmings was a complete surprise. The concept was totally original and made for an instant hit. Its biggest achievement: the simple presentation and easy-to-use control system meant that anyone could pick up the game and play it. Lemmings had the whole family playing games together 15 years before the Nintendo Wii had even launched. It’s recently been seen on the Vita in the form of a rather poor touchscreen-based game. Speedball 2
Released: 1990
The recent news that a next-gen remake of Speedball 2 is in the works has had the Retro Gamer staff drooling uncontrollably into their coffee cups every morning since the game’s announcement. Why, you may ask? Because the original Amiga game was sheer digital perfection, the likes of which had never been seen before, or since. Oozing style from the Bitmaps’ trademark metallic visuals to the cries of “Ice Cream!, Ice Cream!”, Speedball 2’s greatest triumph was its imaginative rule set and peerless two-player gameplay. Many Amiga owners must remember whiling away the hours with a friend and probably do so to this day. A finer sports game it is impossible to find, in the past or present. It’s so good, in fact, that we wish it was a real sport. We’d be too scared to play it mind… The Secret Of Monkey Island
Released: 1991
The Amiga’s incredible graphical capabilities and standard mouse controller made it a perfect machine for point-and-click adventures and there were plenty of them made over the years. Picking out a favourite is an incredibly difficult task but as The Secret Of Monkey Island will have been the first adventure that many of us actually played on the Amiga, we have to go for that. Using an enhanced version of the SCUMM engine from Maniac Mansion, The Secret of Monkey Island looked great and featured plenty of brilliant puzzles. But it was the insane humour that really set it apart from the competition. The world would be a much duller place without Insult Sword fighting now wouldn’t it? LucasArts thought so to, releasing a cool special edition version before it finally closed its doors. Alien Breed
Released: 1991
With only one previous title, the beat-em-up, Full Contact, to its name, few expected much from ex-PD codeshop Team 17 with its second title. That is until Alien Breed made its stunning debut and sent jaws hurtling towards the floor, up and down the country. One of the first Amiga games to use a full 1MB of RAM, Alien Breed looked incredible back in the day and played even better. Basically a sci-fi version of Gauntlet with a great two-player mode, tons of cool weapons and even sampled speech, Alien Breed set Team 17’s standard for creating top-quality arcade-style titles on the Amiga. Later sequels were technically better but none quite had the shocking impact of the original. No wonder its Special Edition spent a whopping 33 weeks in the budget charts. A trilogy was released on last gen systems, but sadly didn’t have the same impact. Sensible Soccer
Released: 1992
Football games have been around for as long as games machines themselves and, over the years, have become much more realistic simulations of the sport as technology has improved. There’s one football game that managed to be extremely playable without being a simulation, however, and that game was the mighty Sensible Soccer. With the emphasis placed well and truly on the fun factor, Sensible Soccer was, for many gamers, the greatest football game of the Nineties and remains the superior choice to this day (although just as many prefer Sensible World of Soccer). There are still hundreds of people out there who kept hold of their Amigas just to play Sensible Soccer. Everyone else can play the superb Xbox Live Arcade version to see what all the fuss is about. Theme Park
Released: 1994
Back in the early Nineties, resource management games were defined by one title alone: Will Wright’s highly influential Sim City. A truly brilliant game,  Sim City’s only problem was that constant town planning wasn’t actually that much fun. The average sugar-fuelled kid needed something with a little more colour, something with fast-moving vehicles and something where little cartoon people throw up on screen. Those needs were answered by British coding legend Peter Molyneux and his ground breaking Theme Park. Designing stomach-churning rollercoasters was endless fun for the child in all of us, whilst adding extra salt to food in order to improve drinks sales appealed to the unscrupulous capitalist inside. The recent DS remake is well worth a look as well. Wings
Released: 1990
You couldn’t ask for a more varied game than Cinemaware’s Wings. Not only did the World War I game feature isometric shooting sections and two-dimensional bombing runs but it also had a tasty three-dimensional dog-fighting mode that was way ahead of its time. It’s hard to believe that the game was made in 1990 as the 3D sections looked absolutely incredible and far in advance of anything that had appeared on consoles, PC or even the arcades at the time. Not just a graphical treat, Wings also had emotional impact and fully immersed you in its world. In between each level it would show pages of a diary, which told of the main character’s eerily realistic wartime experiences, provoking an emotional response in the player that is all too rare in retro and modern gaming alike. An update is due in the coming months, so keep an eye out for it. You can read the original article in issue 39. Buy it now from GreatDigitalMags.com