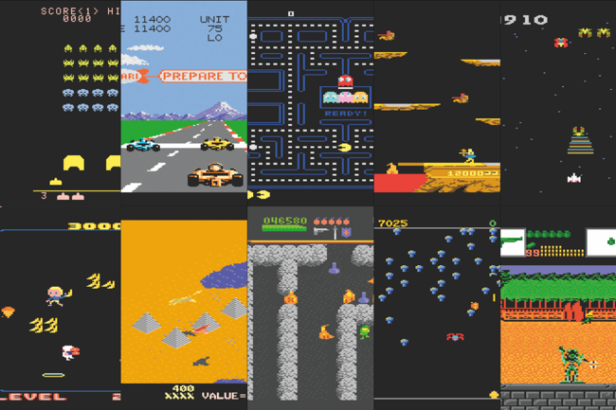 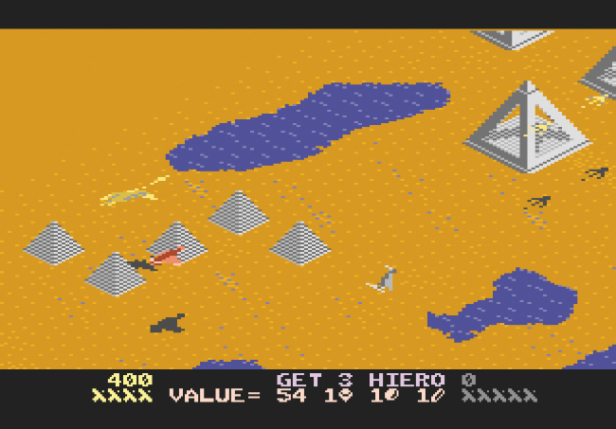 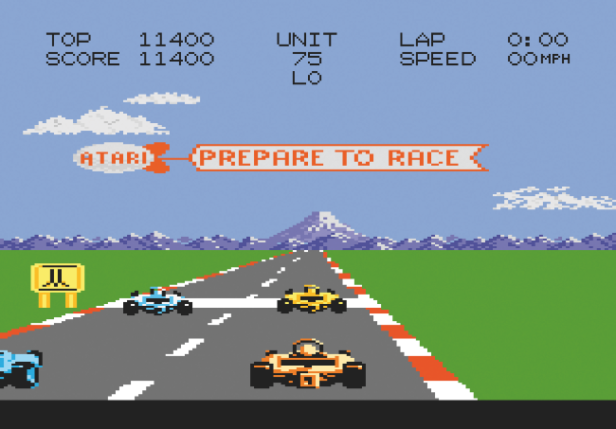 Atari’s 7800 didn’t have much of a commercial life, and as a result it had nowhere near as many games as the Atari 2600. It did have plenty of great gems however, particularly when it came to arcade conversions. Pole Position II
Released: 1984
When it was first to be released as a pack-in in 1984, the Namco-authored and Atari-distributed Pole Position II was at its peak of popularity in the arcades and was a perfect introductory title to show off the system’s capabilities against the likes of the ColecoVision’s great port of Turbo. Exclusive to the Atari 7800, it’s a faithful and fun port, save for the limitations of the 7800’s 2600-based sound. Atari planned to allow its more-advanced POKEY sound chip to be included in cartridges to resolve this, but this game didn’t get that treatment. Unfortunately, it suffered the same thing as the rest of the 7800’s excellent arcade launch titles: by 1986 they were a bit outdated on the market. Pac-Man Collection
Released: 2006
For years the special software for generating each cartridge’s encrypted validation key was thought lost. Then, in 2001, an Atari ST computer with the original key generation program was found, allowing a 7800 homebrew game community to sprout up once it made it into the public domain. Pac-Man Collection is a direct result of this, and is a must-have for any 7800 collector. Featuring near-perfect arcade ports of the original Pac-Man and Ms Pac-Man, arcade hacks like Hangly Man and Pac-Attack, the multiple maze Ultra Pac-Man, and even components like random mazes for Pac-Man and Ms Pac-Man makes it a formidable compilation. Joust
Released: 1984
The 7800 received an almost-perfect port of the early Eighties arcade favourite Joust. Programmed by GCC, the creator of the 7800, it pulled no stops in delivering an extremely faithful port. Even closer than the NES’s 1988 release – and without that platform’s addition of cheesy music – everything is there, from the actual arcade-style title screen down to the accurate sounds. An excellent play, it was yet another strong 1984 launch  title that would have added to the 7800’s claims of being the best, most arcade-perfect console experience on the market. Galaga
Released: 1984
Galaga received the same treatment by GCC to produce another great arcade port and impressive launch title. Unlike the later NES port, the 7800’s version has a visibly smoother motion to the sprites and really shows off the system’s much-lauded multi-sprite capabilities. Beyond that, it’s a trade-off between the two ports. The 7800 reproduced more of the feel and layout of the arcade version, while the NES edition changes the aspect ratio and adds a title and score area off to the side, as well as including level counter icons missing from the 7800 version. Desert Falcon
Released: 1984
Desert Falcon is one of the few planned launch titles that wasn’t a port. It’s an original game, though done in a Zaxxon-style scrolling isometric format. Based around an Egyptian motif, you play a falcon that wants to fly about Egypt getting treasure and firing at bad guys. With the twist of being able to land and walk, it adds elements from another isometric arcade favourite, Congo Bongo. You can also collect various hieroglyphics to get power-ups, which vary depending on the combinations. You can’t go wrong with this game for your collection. All in all, a great early original title. Alien Brigade
Released: 1990
The Atari 7800’s answer to Operation Wolf, this game is actually hard to find because of its release late in the 7800’s lifetime. It’s one of only four lightgun games released for the 7800, and really a lot of fun to play. A sort of primordial plot version of Atari Games’ later Area 51 release, you play a soldier battling aliens trying to take over the bodies of your fellow soldiers. Featuring higher-end graphics and gameplay, the game is also unique in that, at completion, it actually advertises – if not commands you to play – another game released at the time: Planet Smashers. Food Fight
Released: 1984
An excellent port of the arcade game that follows the fantasy of any kid who has seen the infamous food scene in Animal House, Food Fight lets you fight with food – Robotron-style. You play Charley Chuck, who instead of saving the human race is saving an ice cream from the perils of melting. Blocking your way are chefs hell bent on keeping you from your tasty treat, with your own source of protection being food that you can throw. Just as fast as Robotron, it shows off the 7800’s capability to faithfully reproduce arcade titles compared to the other consoles on the market. Centipede
Released: 1984
What can we say about Centipede that hasn’t already been said? It’s a classic arcade shooter that one would expect to see on an Atari console, and once again GCC did a near-perfect port. About the only thing lacking is, of course, a 7800 trackball, but the flawless motion and gameplay more than make up for the omission. This is the type of game that you think of when you think ‘lots of sprites’, and the 7800 handles them easily. Even the sounds are spot-on to the orginal arcade version. A superb launch title for 1984, it’s also one of the few timeless early 7800 games that still held up during its relaunch a couple of years later, and it’s even an excellent game today. Dark Chambers
Released: 1988
If Dark Chambers looks similar to Atari Games’ Gauntlet, that’s because it’s based on its ancestor Dandy by John Palevich. Originally released in 1983 through the Atari Program Exchange (APX), Dandy was taken without the author’s consent and morphed into Gauntlet. Palevich soon negotiated the rights to Dandy with Atari and continued its development on his own, but was never given credit in Gauntlet. However, the Dandy update Dark Chambers appeared on the 7800 and he was given full credit. And it’s just as fun to play as any of the previous versions! Space Invaders
Released: 2008
Unfortunately, if you wanted to play Space Invaders on your 7800 you were limited to the 2600 version. By 1986, Taito was already under lockout from Nintendo, whose Famicom got an updated port. While the 2600 version is respectable and still fun to play, it hardly takes advantage of the 7800’s more advanced capabilities. That situation was solved by homebrew author Bob DeCrescenzo, who also brought you the Pac-Man Collection. Space Invaders for the 7800 gives you an arcade-perfect port, right down to the overlay colouring schemes of the original, and offers a multitude of 2600-esque gameplay options such as moving shields, zig-zagging lasers and invisible invaders.