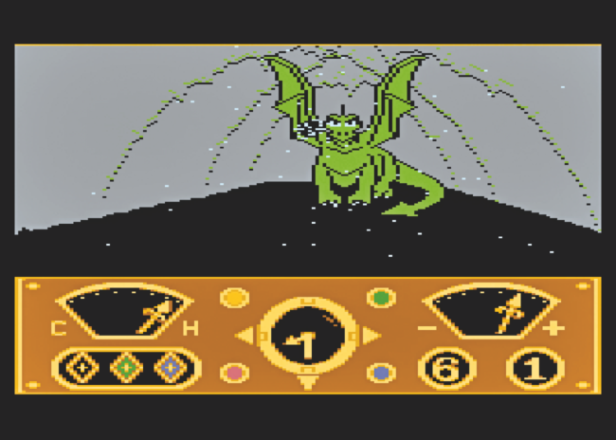 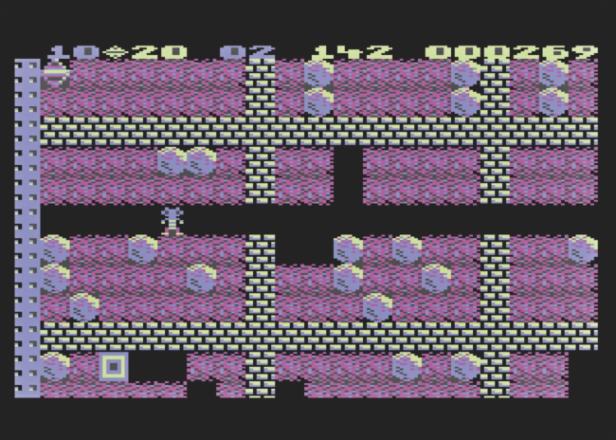 The Atari 8-bit range of computers is now an impressive 35 years old. Although extremely popular in the States, they didn’t have quite the same impact in the UK, typically falling behind more popular systems like the ZX Spectrum and Commodore 64. And yet there are lots of classic games on the system, with many, such as Boulder Dash, starting off on it before moving to other 8-bits. So without further ado here’s our pick of its ten best games. Star Raiders
Released: 1979
Hugely influential to many of those that witnessed it on Atari’s fledgling personal computers, Star Raiders was the title responsible for shifting more Atari 400/800 machines than any other. The granddaddy of the Elite-style ‘space opera’, it was also the world’s first free-roaming first-person perspective game. Updating the generic ‘Star Trek’ games played by many a college student on mainframe systems, it was a striking mix of strategy and fast, immersive graphics that effortlessly sucked players into its universe. Criminally, the game’s creator, Doug Neubauer, didn’t make a single penny from Star Raiders, which he created in his spare time while he was employed as an Atari design-engineer. Encounter!
Released: 1983
Encounter! was so good that when Jeff Minter first saw the game demoed at a computer trade show he hastily convinced author Paul Woakes to make it a full commercial product, giving birth to software house Novagen and paving the way for Mercenary. Playing out the mechanics of Battlezone, at what seems like around a thousand miles per hour, and with filled, solid objects zooming in and out of the screen, Encounter! was a technical marvel. And the impressively scary ‘warp-sequence’ between levels, which flings hundreds of enormous Ping-Pong balls at you while you struggle to avoid a collision, will still have you squirming in your seat like an Olympic rower with a scorpion  in his pocket. Rainbow Walker
Released: 1983
Rainbow Walker is a unique and extremely playable title that is totally exclusive to the Atari 8-bit systems. Borrowing the colour-filling mechanics of Q*Bert and transposing them onto a chequered pseudo-3D scrolling play-field, its impressive z-axis scrolling utilises the Atari’s unique graphic capabilities very nicely. Guiding our rotund hero Cedric across a series of aerial platforms fills in squares with a spectrum of colours, and moving up or down at either vertical extremity scrolls the patterned play-field towards or away from you. Enemy creatures can, and will, undo all of your hard work and must be avoided or ‘pushed’ off the rainbow by scrolling it until a gap appears beneath them. An attractive game and a really clever concept. Pastfinder
Released: 1984
Despite a limited release by Activision (it remains one of the hardest titles to track down), Pastfinder is a great progressive shoot-’em-up which makes good use of the Atari’s unique hardware. Helming a frog-like craft (the ‘Leeper’) your task is to explore a hostile planet while hunting down long-lost alien ‘artefacts’. The scrolling forced-perspective terrain (resembling a top-down Zaxxon) is highly atmospheric, with great use of shadows, and the Leeper is a wonderfully charismatic creation with a superb control ‘feel’. There’s a huge Star Raiders-style strategy-grid to traverse in search of ancient loot, and guiding your ‘space hopper’ through the radioactive wasteland at breakneck speed is enormous fun. Boulder Dash
Released: 1984
At the risk of being predictable we couldn’t really leave Boulder Dash out of our Perfect Ten. Developed for the Atari 400/800 by Peter Liepa and Chris Gray, its beautiful gameplay (inspired by The Pit, an arcade game co-created by Andy Walker of Taskset fame) has been enthralling generations of gamers on various platforms for 30 years, and its hero, Rockford, is a bona fide gaming icon. The dynamic physics, the predetermined ‘rules’ for enemy creatures, and the thought-provoking puzzle-like nature of the game were all masterstrokes. This then, the original creation in the lineage, is a must-play, with some outstanding and very challenging levels, which greatly deserve revisiting. Dropzone
Released: 1984
With Dropzone, a young Archer Maclean took a large helping of Defender, a sprinkling of Jetpac, and cooked up a brilliant and blisteringly paced Jarvis-esque mega blast. Like a fine wine, Dropzone has aged remarkably well, and the original Atari version is most definitely the finest vintage on offer. Considerably bettering Atari’s already very decent Defender conversion, Archer’s magnum opus displays an incredible eye for detail and pushes the Atari hardware to the limit with its incredibly rapid smooth-scrolling, pixel-perfect collision handling, incredible particle effects and fantastic playability. Even in death the game rewards the player’s ineptitude with a spectacular on-screen firework display. Rescue On Fractalus!
Released: 1985
If Star Raiders managed to shoehorn a small but significantly impressive corridor of space into an 8K Atari cartridge, Rescue On Fractalus! went a step further by cramming a whole planet into a 48K computer. Lucasfilm’s first-person fractal flight-sim delivered an incredibly immersive experience, which many thought impossible to achieve. Its release was a defining moment for the Atari 8-bit systems it was originally designed for, wowing gamers on their first exposure to its amazing real-time landscape. The Atari’s faster processor means that this is the definitive version of the game, running around one-and-a-half times faster than the C64 conversion. Bounty Bob Strikes Back
Released: 1985
Bill Hogue’s excellent sequel to his classic Miner 2049er is an outstanding platform romp that improves on its predecessor by some distance. Bob’s mine now has a satisfyingly solid isometric angled look, and there’s a multitude of new contraptions to help (or hinder) our hero. With 25 stages (more than twice the number of the original), and some extremely devious screens with a proliferation of slides, pipes and teleports to scramble your brain, Bounty Bob Strikes Back will test your platforming skills to the max but have you coming back for more. And top players can glorify their achievements on one of the most polished and appealing high-score tables of all time. The Eidolon
Released: 1985
Probably the most ambitious, original and downright atmospheric title of Lucasfilm’s fractal triptych, The Eidolon was scaring the nappy-filler out of gamer’s many years before Doom or Resident Evil were. By cleverly inverting the fractal mountains from Rescue On Fractalus! and Koronis Rift, Charlie Kellner created an incredibly engrossing first-person subterranean adventure with strange revelations and fascinating beasties lurking around every corner. The creatures themselves are all great characters, from comical lowly minions to the game’s famously impressive dragon guardians. And you don’t even want to know what monstrosity awaits you at the end of the final level. Yoomp!
Released: 2007
Imagine playing S.T.U.N. Runner (apparently we’re not supposed to mention Trailblazer) with a bouncing ball in a psychedelic tubular playing field to a stonking soundtrack. Actually, imagine no more, just grab Yoomp! instead. This excellent title was created by a Polish programming team, and was inspired, according to its developers, by an old Bullfrog DOS game called Tube. Whatever its influences, however, this freeware masterpiece deserves to be experienced by as many players as possible, which is why we’ve it’s been included here. Fire it up, grab a joystick, disengage your mind from the niggling background music of reality and prepare to enter the zone.