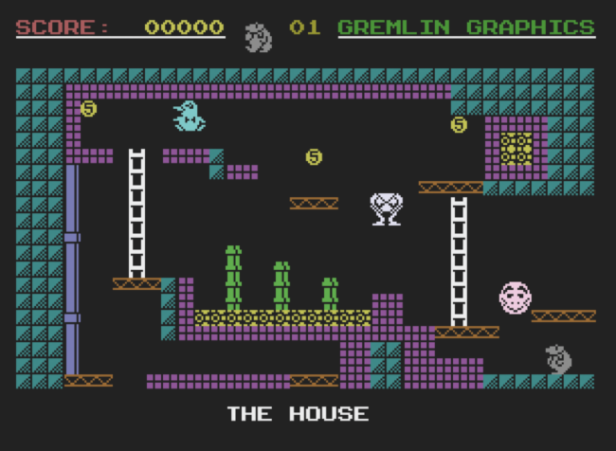 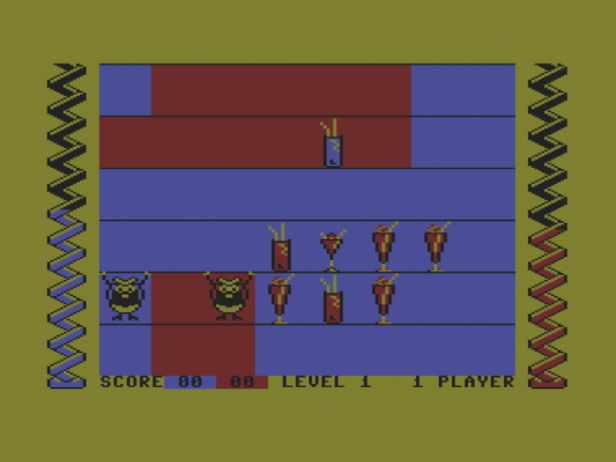 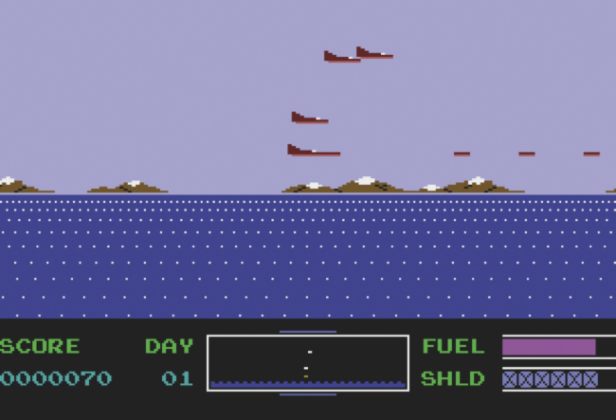 16K is a piddly amount by today’s standards, but talented coders were nonetheless able to work magic on Commodore’s machine. It may have been superseceded by the superior Commodore 64, but it still has plenty of fantastically playable games available as the following prove. Tom Thumb
Released: 1986
Platform games are two-a-penny on the Commodore 16, but very few of them are put together with as much grace and style as Anirog’s excellent Tom Thumb. Set in a massive (178 screens) scrolling environment and filled with a ridiculously large amount of hazards, Tom Thumb can certainly be infuriating in places, but it’s been created with so much care and attention  that you really can’t help but be continually impressed with its gigantic scope. Solidly animated and with some truly inventive level design, Tom Thumb easily leaps into our Commodore 16 Perfect Ten and proves that you don’t need to be a miner or a rotund mole in order to be a great platforming hero. Tutti Frutti
Released: 1985
Proving that he’s some sort of C16 god, the excellent efforts of Shaun Southern appear no less than four times in our top ten. Anyway, as if you couldn’t guess from the accompanying screenshot, Tutti Frutti is a homage to Mr. Do! and while it doesn’t quite match the sheer majesty of the BBC’s Mr Ee!, this is nevertheless very good stuff. Level design is of a high standard, and the varied ways of completing stages mean that you’ll always want to try new things in order to achieve a new high score. As with many of Southern’s games though, it’s the sheer slickness of the overall product that constantly manages to impress. Bongo
Released: 1984
Anirog and Udo Gertz get more than one spot in our C16 Perfect Ten, thanks primarily to their excellent use of the Commodore 16 hardware. The large characters are the first thing that you will notice about the brilliant Bongo. Taking its cue from Nintendo’s classic Popeye arcade game, Bongo the rat is given the task of collecting the floating letters to spell out his name while trying to avoid the bad guy charging menacingly around the platforms. Bongo can move around using ladders, slides, trampolines and lifts, and he can also teleport between the big letters on the screen. And once you get hooked in, there is a construction kit for you to make your very own levels to challenge your friends with. Bandits At Zero
Released: 1986
Another classic effort from legendary coder Shaun Southern. This time he’s turned his hand to Eugene Jarvis’s Defender; the end result, Bandits At Zero is another piece of scintillating code that squeezes every last ounce out of the C16’s limited capabilities. Prepare to be amazed as the on-screen action literally pelts along in front of your eyes. Although it shares many similarities with Defender, the addition of having to refuel is a nice touch, as you really have to check your speed and altitude so you don’t break away from the refuelling plane. Yes it’s another clone, but when it’s put together with this much skill it’s hard not to be impressed. Harvey Headbanger
Released: 1986
A game promoting drinking? The Daily Mail would have a field day with Harvey Headbanger… Regardless of its moral message, Harvey Headbanger is a cracking multiplayer effort that sees the blue blob racing around the screen painting it blue (while rival, Hamish Highball is busy painting it red). Encapsulate your rival’s colour and you’ll create cocktails that will boost Harvey’s ability to recover from the collisions he has with Hamish. Stun Hamish and you can encircle him and score a precious point.
Highly recommended. Auf Wiedersehen Monty
Released: 1987
Auf Wiedersehen Monty was something of a chore on the Speccy, C64 and Amstrad, due to a pointless intermission screen and obscure puzzles. But on the C16, the game returns to its platforming roots. Without the puzzle solving, this cut-down conversion is all about grabbing coins from hard-to-reach places and avoiding the menagerie of mutant beings suddenly peppering the European scenery. Although far more succinct than other versions, the C16 release is much more fun, and offers more open movement. It also has a good stab at playing Hubbard and Daglish’s C64 soundtrack. Kik-Start
Released: 1986
Ignore the name – aside from the treacherous obstacles, annoying tune and the fact you ride a dirt bike, this game has little to do with its C64 namesake. Instead, Kik-Start on the C16 is an out-and-out ‘against the clock’ arcade game, with you trying desperately to reach the end of each stage before the clock runs out, so you can carry on to the next. Cute graphics, decent sound effects and tight gameplay are marred slightly by the game’s difficulty. But once mastered, this game proves itself to be yet another classic in Sout’s arsenal, and a worthy alternative to Kik-Start 2 on the C64. Trailblazer
Released: 1986
The C16 was actually where Sout’s fantastic and unique checkerboard racing game started out. The object is to guide your bouncing ball along a 3D track strewn with holes and multi-coloured tiles. Some tiles do things to your ball (speed it up, fling it into the air, and so on) and holes cause you to waste precious seconds, which isn’t good, since you’re racing against the clock. As with Kik-Start, this is a more linear experience than the C64 release, and it lacks the simultaneous two-player mode. However, it has a purity of gameplay and level of polish that sets it apart from most other games on the platform. Winter Events
Released: 1986
With a mere 16KB to play with, many sports titles on the C16 were sorely limited, but Anco bucked the trend by ambitiously aping Epyx’s Winter Games and releasing this magnificent and visually stunning six-event sports simulation. Amusingly, the two tedious skating events from Epyx’s game were replaced with much more exciting ‘3D’ downhill and slalom events, and decent versions of biathlon, speed skating, ski jump and bobsleigh must have had the typical C16 owner at the time checking to see if some wag had switched machines behind their back. But, no, it was just the genius of Udo Gertz, who also programmed the similarly accomplished Summer Events. Voidrunner
Released: 1987
Jeff Minter was always at his best when working with seriously restricted technology, squeezing every last ounce of power from the most modest of hardware. This pseudo-sequel to Gridrunner is no exception, offering plentiful levels of frenetic blasting, varied attack patterns, and psychedelic special effects. The game is actually more playable than its C64 cousin – it somehow just feels better – and it also takes advantage of the C16’s enhanced colour palette, which makes the game far prettier than the version Llamasoft released for Commodore’s breadbin. (Minter fans should note that Matrix also kicks some serious shoot-’em-up bottom on the C16.)