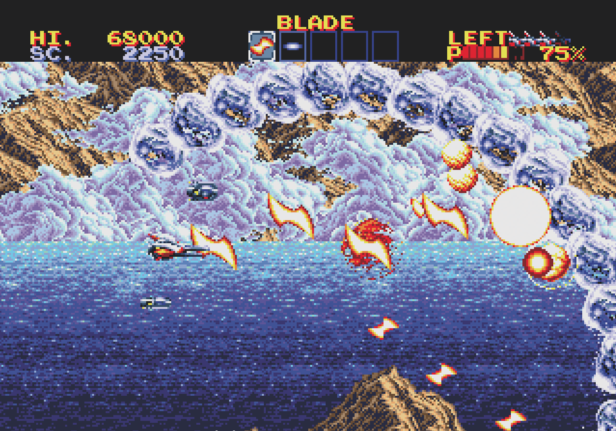 Many consider the Mega Drive to be Sega’s best console and it’s not hard to see why. It had a huge number of diverse games, and some of the best arcade conversions around. Oh and it also signalled the launch of a little hedgehog called Sonic…

Sonic The Hedgehog
Released: 1992
After the success of the original Sonic The Hedgehog, it came as no surprise to see the lovable scamp returning a year later in a brand new adventure. With a refined engine, the addition of Miles “Tails” Prower, a greatly enhanced bonus stage and an excellent two-player mode, Sonic The Hedgehog 2 is easily one of the hedgehog’s most memorable 16-bit outings. While the core gameplay is little different to that seen in the original, Sonic Team threw in plenty of new touches to ensure that gamers wouldn’t feel short-changed. The end result is not only one of the Mega Drive’s greatest platformers, but quite possibly the hedgehog’s finest hours on any system. Devil Crash
Released: 1991
There’s a few pinball games on Sega’s Mega Drive but this superb 1991 offering from Techno Soft remains a firm favourite. While it only features one main table, it’s well designed and boasts all manner of different bonuses that lead you to several smaller, mini-tables. While Techno Soft’s previous pinball title Alien Crush featured an alien theme, Devil Crash has chortling knights, chanting monks and dragons occupying its tables. Released in the UK as Dragon’s Fury, Devil Crash is a superb pinball game that should last you forever. Oh, and it’s got one of the most rocking soundtracks we’ve ever heard. Gunstar Heroes
Released: 1993
Outrageously good platformer/shooter that features dazzling graphics, a crazy relentless pace and dozens of fantastic boss encounters. Created by a bunch of ex Konami staffers (you should all know the story by now) Gunstar Heroes does tricks with the Mega Drive’s hardware that many thought impossible, and even today it has a freshness that belies its 20-year-old roots. While special mention must obviously go to the game’s astounding visuals, Treasure also ensured that the gameplay was just as special and injected all manner of interesting play mechanics to ensure that every level remains as fresh as a proverbial daisy. If you’re after a frenetic blaster then look no further. This is run-’n-gun heaven and shouldn’t be missed. Streets Of Rage 2
Released: 1993
As with Sonic The Hedgehog 2, Sega took everything that made the original Streets Of Rage so fun to play and turned it up to 11. The visuals have had an overhaul with all the heroes and enemies being beefed up and boasting greatly improved detail. Yuzo Koshiro is back with another thumping soundtrack and the game’s many bosses are tougher than ever. Each character now has a selection of special moves and there are four different protagonists to choose from: Axel and Blaze from the original game and new boys Skate and Max. A magnificent scrolling fighter that’s crying out for a next-gen remake. Strider
Released: 1991
Oh come on, did you really think we’d do a Mega Drive top ten and not feature Strider? Despite Darran’s obsessive love for Capcom’s purple clad ninja (it’s a long sad story) Strider’s addition is easily justified, as it’s quite simply the strongest arcade port on Sega’s 16-bit console. Not only does it capture all the character of the coin-op classic, it goes one step further and delivers a stunning soundtrack that actually manages to improve on the arcade original. Sure there’s a fair amount of flickering here and there but as far as capturing the essence of the original game goes no other Mega Drive conversion comes close. Essential. Desert Strike: Return To The Gulf
Released: 1992
Set a year after the events in the Gulf War, Desert Strike sees you climbing into an Apache and using it to stop a despot in the Middle East from starting World War III. Utilising an isometric viewpoint, EA’s blaster saw you storming into armed bases to rescue POWs, whilst using your firepower to take out anything that stood in your way. Despite the destruction you can cause, Desert Strike is quite a cerebral affair, with many of the later levels requiring a fair amount of strategy to complete. The thinking man’s shoot-’em-up. Shinobi III: Return Of The Ninja Master
Released: 1993
Despite a lengthy development period, Shinobi III’s four-year wait was worth it. Not only has the pace been increased, your ninja now knows a selection of new skills. Flying-kicks, a running dash and using your hands to swing across ceilings are just a few of the new abilities you can use and all have been perfectly integrated into the game. There are even sections where you can ride horses or surf along the crest of a wave, dispensing bad guys as you go. If only the later games showed a tenth of the imagination of Shinobi III… Ecco The Dolphin
Released: 1993
Delightful underwater adventure that sees you trying to rescue your dolphin friends when they all get sucked up by a mysterious hurricane. With its focus on exploring the expansive stages and its many devious puzzles, Ecco The Dolphin was quite unlike any other game at the time and instantly caught the public’s attention. The underwater environments are full of detail and bursting with all sorts of exotic undersea creatures. Our only real complaints with Ecco is that some of the sections can be difficult to negotiate, ruining the otherwise tranquil atmosphere. Thunder Force IV
Released: 1993
While Thunder Force III was never released in the UK, Sega atoned by releasing its superb sequel in 1993. Techno Soft’s fourth Thunder Force title (and the third to appear on the Mega Drive) boasted amazing visuals, over-the-top weaponry and a stunning soundtrack that perfectly complemented the frenetic on-screen action. As with Thunder Force III, the first four levels could be approached in any order, but the stages themselves were far larger in scope and featured both vertical and horizontal sections. Throw in some insanely tough bosses, plenty of exotic locations and those stunning visuals and you have one of the Mega Drive’s classiest shooters. Shining Force II
Released: 1994
While it essentially features the same combat system and gameplay mechanics as the original Shining Force, Sega’s sequel is generally considered by many to be a far superior RPG. Take the combat for example: it’s a lot quicker now, making fights far less of a chore than before, and the new counter-attacks add a great degree of spice to the proceedings. The interaction of items is also better integrated with little touches like automatically passing a picked up item to another character when your main hero’s pockets are full, and being able to view an item’s stats before you buy them means that everything flows along rather nicely. A superb RPG that shouldn’t be missed under any circumstances.