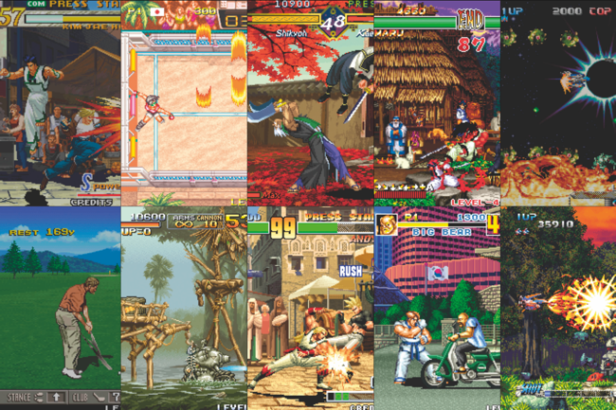 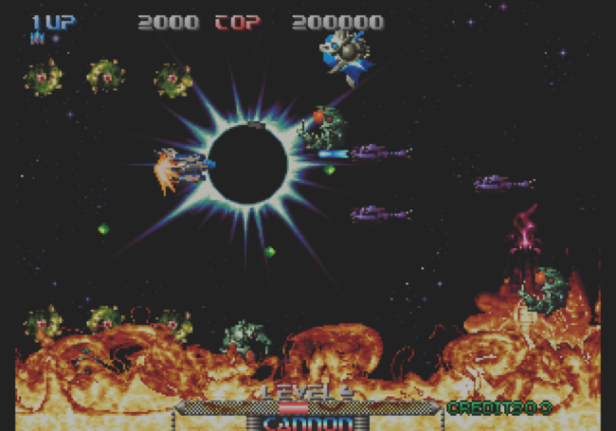 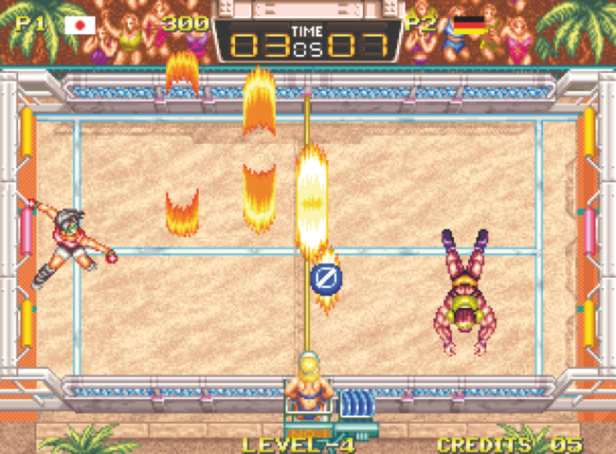 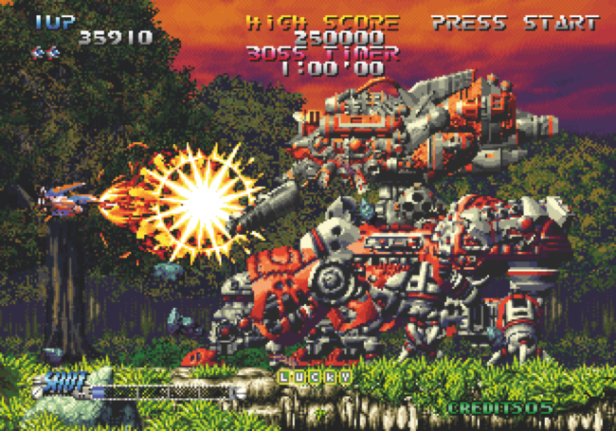 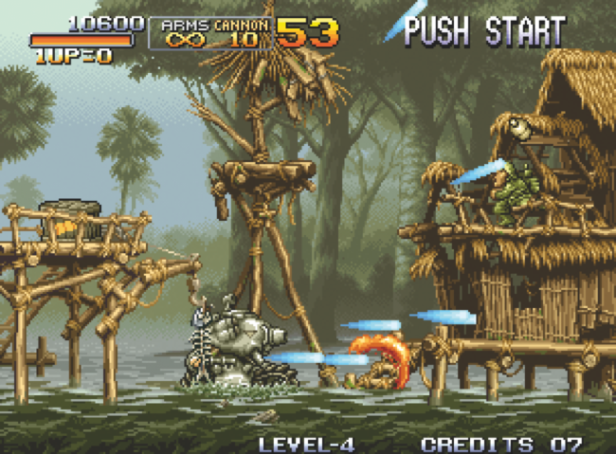 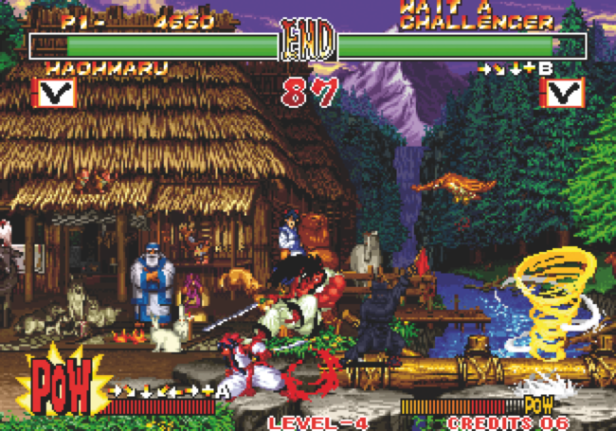 If you want to be a true hardcore collector then go for a complete Neo Geo collection. If you don’t want to take out a second mortgage on your home you could simply focus on the following ten amazing games. It will still cost a pretty penny if you go after the original versions mind. Thank goodness so many are now available on various consoles. Samurai Shodown II
Released: 1994
With its beautiful graphics, silky smooth animation and eclectic character roster, the second part of SNK’s Samurai Shodown series is easily its best. The 202-meg cart featured new fighters, glorious backdrops and even slicker controls than the impressive original. A massive arcade success, Samurai Shodown II was a fantastic two-fingered salute to Capcom and proved that SNK’s style and ambition knew no bounds. It certainly lacks the depth of later games in the series, but for sheer fun and accessibility Samurai Shodown II is without equal. A truly monumental fighter that still plays brilliantly today. Metal Slug
Released: 1996
Nazca’s Metal Slug remains the definitive game in the series. Sure, we love X and 3, but the original just does everything right. The action is fast and furious and the pacing is superb, while the level design and variation remains impressive. Bosses are extremely satisfying to defeat, the tunes perfectly suit the action, and the tongue-in-cheek humour immediately makes it stand apart from other run-and-guns. It’s the glorious animation and the amazingly balanced gameplay, though, that proves to be Metal Slug’s trump card, not to mention that the titular tank is the cutest inanimate object we’ve ever seen. The Last Blade
Released: 1997
Now here’s a game that never seems to get enough love. Achingly beautiful – along with its sequel and Garou, it remains one of the Neo Geo’s best-looking games – The Last Blade’s deliberate pacing, outrageous depth and balanced characters have earned it an army of fans, and yet it’s nowhere near as well-known as Samurai Shodown. Its alarmingly deep gameplay, over-the-top moves, ability to parry, and glorious aesthetics helped usher in a new era of Neo Geo gaming and proved just how versatile the hardware was. Blazing Star
Released: 1998
Sure, you can laugh at its fractured Engrish, but play Yumekobo’s stunning shooter and you’ll be gobsmacked. With its mesmerising pre-rendered sprites, insane bosses, and outrageous power-ups, the 346-meg Blazing Star always justifies its high price tag, and along with Pulstar, it remains the Neo Geo’s finest blaster. Blazing Star assaults the player with excited speech, intense alien waves, finely tuned gameplay mechanics and humongous mayors. The end result is an amazing rollercoaster of a ride that you’ll never want to end. King Of Fighters 98: The Slugfest
Released: 1998
It would have been all too easy to select several King Of Fighters for our top ten, but this is easily our favourite. Everything about King Of Fighters ’98 just screams, ‘Look at me! I’m so much better than everything else!’ The gameplay is instantly accessible but offers a satisfying layer of depth and its cartoony visuals still look sensational, while its many and varied backgrounds are some of the most detailed around. Add in its massive roster of excellent characters and it’s another essential AES purchase. Windjammers
Released: 1994
Windjammers proves that you don’t need superlative visuals or complex fighting mechanics to become an essential AES release. Essentially nothing more than a tarted-up version of Pong – you fling a frisbee and use angles to slip it past your opponent – Windjammers is one of the finest multiplayer games on the system and combines slick controls and fast gameplay to create one of the most enjoyable games around. Like the best arcade games, it’s easy to get into but includes enough nuances and techniques to ensure that you’ll constantly return to it. Garou: Mark Of The Wolves
Released: 1999
There can’t be many Retro Gamer readers who aren’t aware of this fantastic title, as we harp on about it every chance we get. Honestly, though, Mark Of The Wolves is basically the finest brawler on the AES and possibly the finest 2D fighter of all time. In addition to totally revitalising the Fatal Fury series, it boasts 11 new fighters, some of the best visuals to ever appear on the AES, and nigh-on perfect gameplay mechanics. It’s expensive, but you could argue that you’d never need to buy another fighter. Neo Turf Masters
Released: 1996
Extremely tough to get hold of – it currently has an ‘extra extra rare’ rating on Neo-Geo.com – this offering is still worth tracking down, providing you can afford it. While Neo Turf Masters (Big Tournament Golf in Japan) doesn’t really bring anything innovative to the table, Nazca’s superb offering plays an excellent version of the sport thanks to its slick presentation, tight controls and speedy pace. There are two modes to choose from, a variety of golfers, and some beautiful courses to play on. An excellent, surprisingly deep, game of golf. Fatal Fury Special
Released: 1993
Like Garou and The King Of Fighters ’98, Fatal Fury Special is available on Live Arcade for just 800 Points. Purists may want to go for the original, and with a nice low price point it’s definitely worth picking up. Essentially an updated version of Fatal Fury 2, improvements include a new combo system, speedier overall gameplay and a far larger roster of playable characters. Indeed, you now have access to all the bosses from FF2, as well as the return of several non-player characters from the original Fatal Fury, including Geese Howard and Duck King. It looks wonderful as well, with massive sprites and glorious backdrops. Pulstar
Released: 1995
One day we’ll confirm that Pulstar was created by former Irem employees, but for the time being you’ll just have to be content to play one of the Neo Geo’s toughest shooters. Unflinchingly difficult – our hats are doffed to anyone who has 1CCed it – it requires a hell of a lot of skill to make any sort of progress but is so fantastically designed that you’ll want to keep persevering regardless, especially once you’ve managed to get to grips with its excellent charge system. Despite its difficulty, Pulstar remains a sensational addition to any Neo Geo collection and is highly recommended to all hardcore shmup fans.