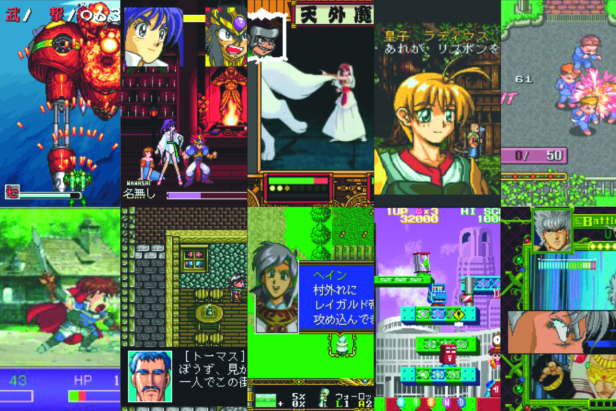 With just over 60 titles available, finding ten amazing games for the PC-FX is pretty tough going. We’ve waded through countless dating sim games to pick out the titles that ever prospective owner should play. Battle Heat
Released: 1994
Easily the most impressive of the three titles that launched with the PC-FX, Battle Heat is also the best illustration of how FMV gaming almost became acceptable. Looking every inch like a Fist Of The North Star anime movie, players must press buttons in order to pull off moves and if successful the resultant attack is displayed instantly via an animated sequence. Players can also counterattacks before they connect and therefore alter the chain of events. Lightning-fast transitions and no pauses between the sequences create an experience you have to try at least once. It may not hold a candle to ‘true’ fighting games, but it remains a thoroughly entertaining diversion nonetheless; it’s also cheap and easy to locate these days, too. Der Langrisser FX
Released: 1996
This criminally undervalued turn-based strategy series was only localised for Western consumption once (the first Mega Drive title was released by Treco under the name Warsong in the early Nineties), but it nevertheless enjoyed a healthy following in its native Japan right up to the PlayStation/Saturn era. This is essentially an updated version of the sublime second Mega Drive game with the added bonus of some lovely CD-quality tunes and a polished anime intro, which really showcases the talents of character designer Satoshi Urushihara (Plastic Little, Legend Of Lemnear). Chip Chan Kick!
Released: 1996
Playing like the long-lost relative of Taito’s Parasol Stars and Bubble Bobble, Chip Chan Kick! is a highly enjoyable single-screen platform romp featuring wide-eyed anime protagonists and super-colourful level design. If there was ever a game to prove that the NEC’s machine was a serious contender in the 2D arena, then this is it – the presentation is gorgeous and the game drips with infectiously cute character and charm. The music is also worthy of note, adding immensely to the slapstick atmosphere. Unsurprisingly, as one of the few traditional action games available for the system this is worth a lot these days but represents one of the more accessible and downright fun releases for the PC-FX. Kishin Doji Zenki: Vajura Fight
Released: 1995
When it was released in 1995 this astonishingly brilliant game provided many gamers with a reason to shell out their hard-earned cash on a PC-FX. A side-scrolling 2D action platformer with a particular emphasis on impressive combat with nasty-type supernatural demons, Zenki contains some astounding set pieces that seamlessly combine FMV with large, well-animated 2D sprites and even a brief smattering of 3D. Zenki provides a tantalising glimpse of what the PC-FX was really capable of; it’s a crying shame that more games like this weren’t released during its life span. Tyoushin Heiki Zeroigar
Released: 1997
Considering the embarrassing abundance of shooters that happened to find their way onto the PC-Engine, it’s quite shocking to think that this fine effort constitutes the PC-FX’s sole 2D blaster. Like Zenki, this title proves just how competent the machine is at handling intensely crafted 2D action, with large numbers of highly detailed sprites zipping around the screen with no hint of slowdown whatsoever. While it’s debatable that Zeroigar is up there with the PC Engine’s finest 2D shooters, it’s certainly an essential PC-FX purchase – if you can find a cheap copy that is. Farland Story FX
Released: 1996
Like Langrisser, this is another instance of an existing strategy-RPG franchise being subtly updated to utilise the additional power of the PC-FX. Similar to Sega’s Shining Force and Nintendo’s Fire Emblem series, Farland Story FX is one of the more aesthetically pleasing titles available for NEC’s console, with some gorgeous artwork and character design. The action takes place over a 2D battlefield with combat switching to a side-on view whenever an enemy is encountered. Everything is very polished and the language barrier doesn’t prove to be too much of an issue, so this is worth considering if you hanker for some RPG action. Last Imperial Prince
Released: 1997
While Last Imperial Prince certainly has its faults, it still warrants investigation if you’re a fan of action RPG titles. The visuals are generally excellent throughout and some suitably atmospheric cut-scenes help push the engaging story along nicely. In terms of gameplay, it’s not a million miles away from the likes of Zelda II and Princess Crown. Naturally, all the text is in Japanese but with a bit of trial and error you can still make good progress. Unquestionably rough around the edges, this nevertheless proves to be a nice diversion from the endless dating simulators that populate the machine’s library. Tengai Makyou: Karakuri Kakutoden
Released: 1995
Essentially using the same game engine as Battle Heat, Tengai Makyou is based on the Far East Of Eden series of games, which was a massive hit for Hudson Soft on the PC-Engine. The mechanics of the game are fundamentally the same with button presses activating pre-rendered move sequences, but there’s also a lot more humour at work here and the game benefits from better quality animation and tighter gameplay. Sadly, Tengai Makyou Karakuri Kakutoden is much harder to locate than its fairly common stable mate. Fire Woman Matoigumi
Released: 1996
It may only be a dating game but Fire Woman  Matoigumi is a cut above other examples available on the PC-FX. Naturally, you assume the role of a new high-school student but refreshingly this game doesn’t force you to endure endless static storytelling screens, as is the case with so many other games on the system. Instead you’re given a surprisingly free reign and the game is constantly evolving and changing, with a massive school campus to explore and investigate. As you might imagine a small knowledge of Japanese is required to get the most out of Fire Woman, but with a bit of patience it’s possible for you to enjoy it regardless. Dragon Knight 4
Released: 1997
Originally released on home computers in Japan, the Dragon Knight series is infamous for its predilection for buxom nude ladies in highly compromising situations, but people often forget that there’s a half decent strategy RPG hidden underneath all of that smut and titillation. Visually this is one of the more attractive PC-FX titles available and it’s ably assisted by a moderately deep and engaging battle system, not to mention a half-decent storyline. As is the case with so many of the system’s better titles, there’s heaps of Japanese text but it is possible to play it even if you don’t understand the language – just make sure you’re over 18 before loading it up.