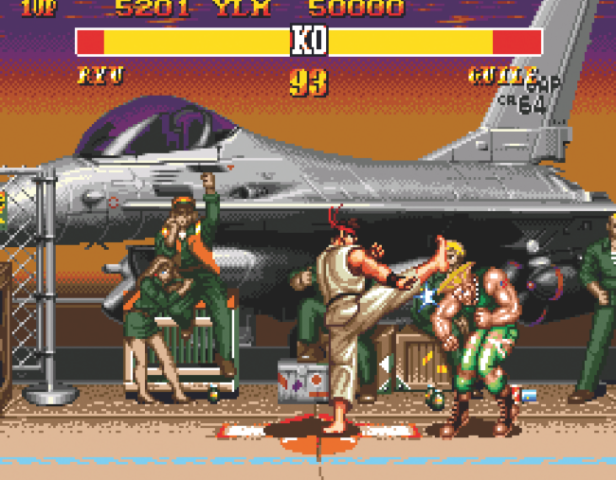 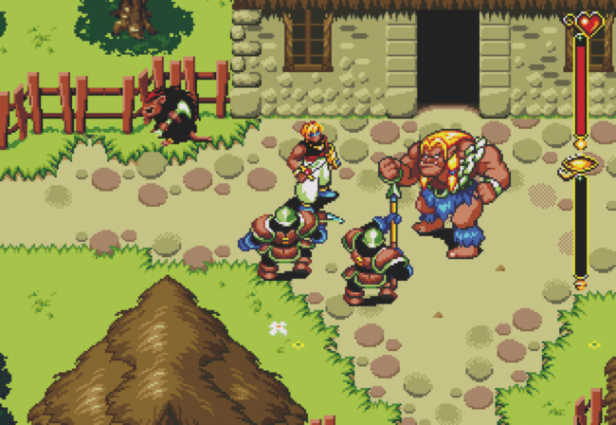 Sega’s Nomad is becoming a serious collector’s machine, due to its limited rarity (it was only released in America) and the fact that it’s a handheld Mega Drive and handheld Mega Drives are cool. While Darran’s owned a couple over the years he foolishly gets rid of them each time because the machine’s screen doesn’t make it very suitable for shmups. Don’t make the same mistake as Darran and make sure that if you do get this awesome handheld, you get the games best suited to it. Here are the first ten you need to own. Dr Robotnik’s Mean Bean Machine
Released: 1993
If you’re looking for an excellent puzzle game to play on your Nomad, then look no further. Based on the Sonic cartoon, Mean Bean Machine was a Puyo Puyo-style puzzle game by Puyo Puyo creator Compile. Players battle against Robotnik’s cronies in a race to match coloured jellybeans as they cascade down the screen. The game features 13 stages and a handy password system, so it’s perfect for dipping in and out. Its colourful graphics and single-screen action make it great for the Nomad’s display. Incidentally, there’s a pretty decent version available for Game Gear. Story Of Thor
Released: 1994
The Nomad often struggles to display small text crisply, and games with tiny words tend to be adventure games. One RPG that doesn’t fall into this bracket is Story Of Thor, one of the latest Mega Drive RPGs. Like Zelda, the hero, Prince Ali, uses the powers of four good spirits to save his kingdom from an evil ne’er-do-well. With chunky visuals, fantastic music by Sega music maestro Yuzo Kushiro and compelling gameplay, this is a classic addition to any Sega collection.  While this still features a fair amount of blur, it’s never anything more than a niggle. Ranger X
Released: 1993
The first and last game by Gau Entertainment, before the studio was folded into another, Ranger X remains one of the best looking Mega Drive titles ever. Essentially just Cybernator meets Silkworm, in Ranger X you pilot the eponymous assault suit, which is accompanied by a motorbike, and which the player can move independently. Hard as Charles Bronson, and just as colourful, Ranger X was an underplayed MD shoot-’em-up classic that, owing to its chunky visuals, works brilliantly on the Nomad’s tiny screen. Devil Crash
Released: 1991
We reckon that Devil Crash’s Gothic pinball action is perfect for the Nomad. With simple controls (the left flipper is controlled using any button on the D-pad while the right flipper moves using a face button), take-it-in-turns two-player multiplayer, and big chunky graphics – not to mention addictive gameplay perfectly suited to short bursts – it ticks all the boxes. While Techno Soft’s classic may only have one table to play on, there is still plenty of game to discover, with the main table leading you into six hidden bonus mini-tables and all sorts of freakish targets to smash. It’s a must own for any Nomad collection. Castle Of Illusion: Starring Mickey Mouse
Released: 1990
From its captivating opening to its lavish cartoon visuals, inventive level design, and pick-up-and-play gameplay, Castle Of Illusion is a quality Mega Drive platformer that makes the transition to Nomad brilliantly. Criticised for its sedate pace compared with other classic platformers (notably those starring a certain blue hedgehog), Castle Of Illusion is actually more Nomad-friendly, as less blurring and colour smudging occurs during the action bits. Splatterhouse 3
Released: 1993
Until the release of Splatterhouse 3, the series was just a gory grindhouse version of Irem’s Kung Fu Master: its hero Rick ploughing his way through scores of mutant freaks instead of guys in pyjamas to reach his love, Jennifer. For Splatterhouse 3, Namco tweaked the formula. Rather than work your way from one side of the screen to the other, Rick battles through mazes of rooms, looking for a doorway that will lead him to the next bit of the game. With simple gameplay and giant sprites, Splatterhouse lent itself brilliantly to the Nomad. Comix Zone
Released: 1995
Released around the same time as the Nomad and used to demo the machines on its packaging, Comix Zone was perfectly matched to Sega’s handheld. A side-scrolling beat-‘em-up set within the panels of a comic book, enemies would be drawn in front of your very eyes and the action played out against a fantastic rock soundtrack. What Comix Zone lacked in longevity – it only had three stages, two levels deep – it more than made up for in ambition and presentation. Sadly, like the Nomad, the game came to life a little too late for Sega to really capitalise on its quality. So it’s a fitting game to be playing on a Nomad. Streets Of Rage 2
Released: 1993
Cited by many as Mega Drive’s greatest brawler, Streets Of Rage 2 was a magnificent sequel and Sega’s answer to Capcom’s arcade smash Final Fight, which Nintendo had secured the rights to for SNES. Sega won hands down. Pumping the original SOR graphics full of performance-enhancing steroids, adding characters, moves, levels, bosses, and more of that excellent Yuzo Koshiro music, it remains the ultimate side-scrolling brawler for the Nomad and just so happens to be one of the finest sequels in videogaming history. Toy Story
Released: 1996
Appearing late in the Mega Drive’s life (1996), Toy Story was one of the machine’s best-looking platformers. Utilising a similar 3D graphical technique to Rare’s Donkey Kong County to give character sprites a real pop, the game looked superb. With a variety of levels based on key scenes from the film, including a neat Wolfenstein FPS section set inside a grabbing machine, and a nifty racing level that was exclusive to the Mega Drive conversion. Owing to its beefy visuals and charm, Toy Story is a handheld gem you’ll want to replay again and again. Street Fighter II: Special Champion Edition
Released: 1993
Looking for a one-on-one fighter to enjoy while out on the road? Then grab a copy of Street Fighter II Champion Edition. The Nomad’s six buttons and concave D-pad are perfect for frantic sessions on Street Fighter II. The only problem is that to play against friends you’ll need to connect your machine to a TV as fighting over the small display isn’t that enjoyable. Outshined by Street Fighter II Turbo, the Genesis port had a few aces up its sleeve: it included the arcade attract screen, a team-battle mode and 11 speed settings. You can read the original article in issue 69. Buy it now from GreatDigitalMags.com